~Easterling~
"Wicked men. Servants of Sauron. They are called to Mordor. The dark oneâ€™s gathering all armies to him."

A few weeks after their mother’s death, Tolkien and Hilary moved into a top-floor bedroom in Beatrice Suffield’s house. 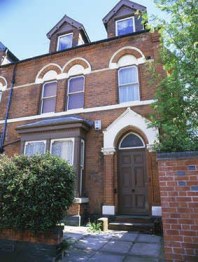 This move was facilitated by Fr Francis, though he later realised that it was far from an ideal arrangement as the newly-widowed Beatrice had very little time or emotion available for the young boys.

The view from their window was of almost unbroken rooftops with factory chimneys beyond, and Tolkien felt that the countryside now belonged only to a distant past that he would never regain. His feelings for the countryside, still raw from leaving Sarehole, now also became associated with his mother and emotionally charged with bereavement. For the rest of his days, his love for the memory of the countryside of his youth was a central part of his writings, and remained intimately bound up with his love for the memory of his mother.

The Birmingham Oratory, the local Catholic church and home to Fr Francis, became Tolkien and Hilary’s real home. They started serving mass for Fr Francis early in the morning before eating breakfast in the refectory, where they invented a rather unusual game of spinning the kitchen cat around in the revolving food hatch. That tended to keep them busy until they had to leave for school.

In 1905, Tolkien found his first long-term friend – Christopher Wiseman. They met in the 5th Class where Tolkien gained first place in the class, and Christopher second place. The two then progressed through the school together, their initial rivalry turning into friendship. They shared an interest in Latin and Greek, they both enjoyed rugby, and had an enthusiasm for discussing anything and everything – including religion.

A love of language

Tolkien soon started to show an aptitude for languages. Greek and Latin formed the backbone of the school’s curriculum, and both were taught particularly well in the 1st class – which Tolkien reached shortly before his 16th birthday. There, he was taught by Robert Cary Gilson, who encouraged his pupils to make a detailed study of classical literature. This was entirely in keeping with Tolkien’s inclinations, and partly as a result of these teachings of Gilson’s, he began to develop an interest in the general principles of language, thus starting his path towards a career in philology.

He started to search for elements common to French, German, Latin and Greek, trying to understand why the languages were the way they were. His interest increased even more when he discovered Anglo-Saxon. In it he saw a language both familiar and recognisable as an antecedent of the language he used everyday, but also one that was remote and obscure. Tolkien then turned to Middle English and discovered “Sir Gawain and the Green Knight”, and then “The Pearl”. Once he realised that he also loved that language, he moved on to Old Norse, and took a few hesitant steps in understanding it – just enough to read the original of Sigurd and Fafnir.

Tolkien continued to search out the structure behind language, developing a deep love for the look and sound of words – an academic discipline called philology. He also started to invent his own languages, allowing him to put all his favourite sounds together.

For his first invented language, he decided to take an existing language as a starting point. He used the collection of Spanish books in Fr Francis’ room, and the resulting language, Naffarin, had a good deal of Spanish influence but also its own phonology and grammar. But almost as soon as he began work on his language, he got sidetracked onto another language – Gothic.

Naffarin was the first language Tolkien created on his own, though prior to this, he had had a hand in the languages Animalic and Nevbosh, created by the Incledon sisters. Information on those two languages can be found in the article for Mary Incledon.

Tolkien later talked about the creation of Naffarin in “A Secret Vice”:

“It has long since been foolishly destroyed, but I can remember more than enough, accurately and without sophistication
…
I will give you a brief sample of Naffarin.

Tolkien then managed to acquire Joseph Wright’s “Primer of the Gothic Language”, and found the language immensely attractive. He learned all of the fragments of the language that are still known, but also began to invent “extra” words to fill in gaps in the limited vocabulary.

After that, Tolkien moved on to inventing a supposedly unrecorded but historic Germanic language. Rather unusually, he developed his invented languages “backwards” – positing the hypothetical “earlier” words by means of an organised “historical” system. Not content with languages, Tolkien also invented alphabets, and some of his school notebooks contain ed systems of code symbols for the English alphabet.

Away from language, Tolkien went to Lyme Regis every summer with Hilary and Fr Francis. The cliffs there are full of fossils, and once, he found a piece of prehistoric jawbone that he supposed to be a piece of a petrified dragon.