After the end of that term, Tolkien and Hilary went on a trip to Switzerland organised by the Brookes-Smith family. The travelling party consisted of the Tolkien boys, their aunt Jane, the Brookes-Smiths and their children, and some schoolmistresses who were friends of Mrs Brookes-Smith.

The holiday started at Interlaken, where they set out walking to Lauterbrunnen, then Mürren, then to the head of the Lauterbrunnenthal. The group slept rough, often in haylofts and cowbyres. They walked by map, avoided roads, and never booked ahead. From the Lauterbrunnenthal, they went over the two Scheidegge to Grindelwald and the Meiringen. There Tolkien saw the wonders of the Eiger, Münch and Jungfrau. 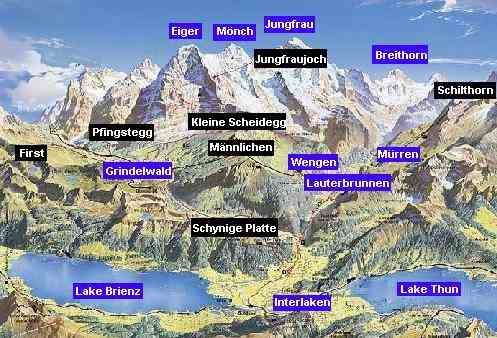 They then stayed in Brig, a village at the foot of the Aletsch glacier, and while they were there, they took a day trip with guides up onto the glacier. While walking there, a large rock shot down the mountain missing Tolkien by no more than a foot. Then they left Brig and crossed into the Valais, reaching Zermatt and then climbing, roped, to a high hut belonging to the Alpine Club. On the way, Tolkien nearly missing falling into a crevasse, but he did also manage to see the Matterhorn.

Before returning to England, there is a legend that Tolkien bought some picture postcards. One was the reproduction of a painting by J. Madlener called Der Berggeist – the mountain spirit. The picture showed an old man with a white beard sitting on a rock under a pine tree, and talking to a fawn. He had a wide-brimmed round hat and a long cloak. His expression was humorous but compassionate. Tolkien was supposed to have kept this card carefully, and a long time afterwards wrote “Origin of Gandalf” on its paper cover. Unfortunately, it seems as if this version of events isn’t actually true, but it makes a wonderful story.

The party returned to England in early September 1911, and in the second week of October, Tolkien was driven to Oxford by Dickie Reynolds.