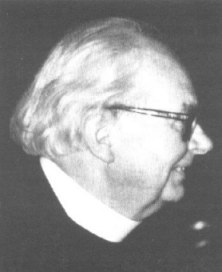 John was born on the 16th November 1917, in a Cheltenham nursing home. He was baptised by Father Francis, and was also named after him.

He was schooled at a Catholic boarding school in Berkshire, and then he went on to Exeter College to read English from 1936 to 1939.

He then trained for the Catholic priesthood in Rome. During WW2, in the middle of his training, he was evacuated with his fellow students. Following a brief spell in the Lake District, the College moved to Stoneyhurst College in Lancashire. He was ordained at the Church of St Gregory and Augustine in Norht Oxford in February 1946, and he began his career as a priest in Coventry before moving to the English Martyrs church in Sparkhill, Birmingham, where he was also a scout leader of the 159th English Martyrs Scout group. In 1947, he was working as a priest in the West Midlands, and in 1957, he was moved to Knutton Roman Catholic Church (Staffordshire), where he stayed until 1966. He then became priest-in-charge at the Church of Our Lady of the Angels and St Peter in Chains, in Hartshill, a suburb of Stoke-on-Trent. He was also the chairman of governors at Bishop Right School, the chaplain of the North Staffordshire Catholic Teachers Association and the area chaplain of the Young Christian Students. He was also chaplain to the University College of North Staffordshire.

From 1957 until he moved to Oxford, he lived in Stoke-on-Trent, at the Presbytery in Hartshill Road. In Oxford, he served at St Peter’s in Eynsham before retiring in the 1990s.

In 1973, he chose the prayers and readings for Tolkien’s Requiem Mass at the Church of St Anthony of Padua in Headington, Oxford. He was the chief celebrant at the Mass, aided by Fr Robert Murray and the parish priest, Magister Doran.

John Tolkien’s life ended under somewhat dark clouds. He was accused of abusing boys in his parish, but the charges were eventually dropped:

“The Crown Prosecution Service has advised the police not to bring charges against Father John Tolkien following allegations of historic sexual abuse.

After careful consideration of all the circumstances of the case, The CPS has decided that it would not be in the public interest to proceed.

This decision was made following the submission of expert medical opinion regarding Father Tolkien’s state of health.” 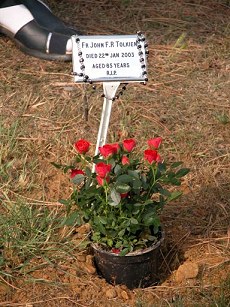 He was also worried about the release of the films, believing that they were going to make the Tolkiens’ lives even more public:

“The Tolkien family is under perpetual abuse of one kind or another. It goes on all the time. I am anticipating endless bother when the film actually comes out.”