Got some time? Go play some games. 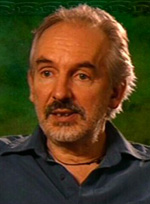 Character:
Illustrator, Conceptual Designer, Set Decorator
Comments About Character:
â€œIn illustrating The Lord of the Rings I allowed the landscapes to predominate. In some of the scenes the characters are so small they are barely discernible. This suited my own inclinations and my wish to avoid, as much as possible, interfering with the pictures being built up in the reader's mind, which tends to be more closely focussed on characters and their inter-relationships. I felt my task lay in shadowing the heroes on their epic quest, often at a distance, closing in on them at times of heightened emotion but avoiding trying to re-create the dramatic highpoints of the text. With The Hobbit, however, it didn't seem appropriate to keep such a distance, particularly from the hero himself. I don't think I've ever seen a drawing of a Hobbit which quite convinced me, and I don't know whether I've gotten any closer myself with my depictions of Bilbo. I'm fairly happy with the picture of him standing outside Bag End, before Gandalf arrives and turns his world upside-down, but I've come to the conclusion that one of the reasons Hobbits are so quiet and elusive is to avoid the prying eyes of illustrators."
Biographical Info:

Alan Lee was born on August 20, 1947, and is an English book illustrator and movie conceptual designer.
He has illustrated several works of J.R.R. Tolkien, including the centenary edition of The Lord of the Rings, The Hobbit, and the new release of The Children of Húrin. Other books he has illustrated include Faeries, Lavondyss by Robert Holdstock, The Mabinogion, Castles and Tolkien’s Ring (both by David Day), The Mirrorstone by Michael Palin, The Moon’s Revenge by Joan Aiken and Merlin Dreams by Peter Dickinson. He has also illustrated Rosemary Sutcliff’s adaptations of Iliad and Odyssey (Black Ships Before Troy and The Wanderings of Odysseus), for which he received a Carnegie Medal. He won the Kate Greenaway Medal for illustration in 1993 for Black Ships Before Troy and the Best Artist Award at the World Fantasy Awards of 1998.
Lee and John Howe were the lead concept artists of The Lord of the Rings. He illustrated many of the objects and weapons for the movies. In 2004, he won an Academy Award for Best Art Direction for his work on The Return of the King.
Lee has also worked as a conceptual designer on the films Legend, Erik the Viking, King Kong and The Chronicles of Narnia: The Lion, the Witch and the Wardrobe. He recently published his concept artwork for the Lord of the Rings films, entitled The Lord of the Rings Sketchbook.
Alan Lee currently lives on the edge of Dartmoor in south-west England.

Visual Effects
The Chronicles of Narnia: The Lion, the Witch and the Wardrobe (2005) (visual effects conceptual designer)