~Aragorn~
"...his hood was cast back, and his dark hair was blowing in the wind, a light was in his eyes: a king returning from exile to his own land." 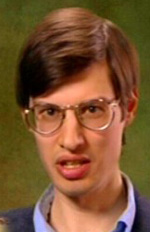 Born in Indiana, USA, David Salo grew up in New York and New Jersey, the son of archeologists. He was first introduced to The Lord of the Rings at the age of six or seven and thus began his fascination with professor J.R.R. Tolkien’s invented languages.

As an adult, he studied Greek and Latin in Saint Paul, Minnesota at Macalester College. When David Salo first heard about the Peter Jackson project, he was a graduate student at the University of Wisconsin-Madison. Taking initiative, he wrote to the Peter Jackson and pointed out that it was important to use correct Elvish in the films. He also included a résumé of his previous work, which included another commercial project he had worked on; the Middle-Earth role-playing game. His letter paid off, David Salo is best known as the official Elvish translator for The Lord of the Rings films.

He earned his Masters Degree in 2002 and is currently a doctoral candidate in linguistics, studying morphology of Tocharian, a language of mediaeval China. One of his other projects includes an entomological text of Tolkien’s Sindarin language, totaling over 300 pages, which he hopes to publish. He lives in Wisconsin with his wife Dorothea, a fellow linguist, whom he married in a small ceremony on the 23rd of May 1998.