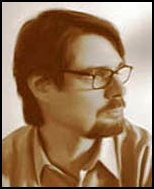 Ted Nasmith is one of the better known Tolkien artists, his works are among my favourites. His landscapes and sceneries capture the essence of middle earth perfectly and the artwork used in the illustrated Silmarillion is absolutely amazing. Nasmith has been illustrating scenes from the Lord of the Rings and other Tolkien works for almost 30 years and intends to continue to do so for a while yet.

“It’s difficult to describe exactly what informs my interest in Tolkien, but suffice it to say quite simply that I have a powerful affinity with his writing, so full of vast, lost, misty expanses and its unique mixture of the familiar and strange.” – Ted Nasmith, Official web-site.

Place of Birth: Born in Goderich, Canada in 1956

Education and Career: After graduating from high school, Nasmith was taken on by an Architectural firm. He now works as a free lance architectural renderer as well as illustrating Tolkien and other works.

Family: Ted Nasmith lives and works in Toronto, Canada. He has a wife and three children.

Calendars: Much of Nasmith’s better known work has featured in calendars. His work was published in parts of the 1987 and 1988 calendars and he has had full calendars for the years 1990, 1992 1996 and 2000. Ted Nasmith is also in the process of doing calendars for each book in the Tolkien trilogy, starting with the Fellowship of the Ring in 2002.

Other illustrations: Ted Nasmith’s illustrations have been featured on a diverse collection of items including the Lord of the Rings collectable plates, Middle-Earth collectable card game, puzzles and The Hobbit board game. He was also asked to help Alan Lee and John Howe with the conceptual art for the Lord of the Rings film trilogy. He was unable to do this however, due to other family and work commitments.

Influences: Ted Nasmith talks about his influences on his official web-site:

“Several influences guide my sense of how best to portray Middle-earth and its peoples, creatures, and other aspects, both in general and as I conceive an individual setting or image. Besides the traditional romantic illustrators and painters of the 19th and 20th centuries, impressions from cinema, light effects observed and/or photographed, as well as pictorial reference materials in my files or from the public libraries tend to help me realise the ideas in my mind’s eye.”

Ted Nasmith on Tolkien: The following are extracts of interviews with Ted Nasmith, from his official site and from Harper Collins publishers. Talking about a range of topics,

Discovering Tolkien Nasmith discovered Tolkien in 1971 at the age of 14, when his sister gave him a copy of the books to read. “Discovering Tolkien, had a very profound effect on me and helped lead to much that I now count most significant in life. It opened up in me a dormant love of lost and misty times, myth and legend. Not since childhood had I felt such a sense of ‘home’, unaware of the effects the intervening years had had in displacing it.”

His early work Shortly after reading the books, Nasmith sent two of his illustrations to Tolkien, including The long expected party: “He said he liked my painting of the Dwarves, Gandalf, and Bilbo at Bag End, but that my Bilbo looked a little too much like a child. (That was some early useful advice!)” The 1988 calendar was another early work. Ted Nasmith was not particularly happy with the four paintings featured in it. “They were ill-considered watercolours, a naïve attempt to reflect The Hobbit as a children’s book”

Favourite pieces? I guess that would include Rivendell, The Last Words of Boromir, Tom Bombadil and the River Daughter, Lady Galadriel, Éowyn and the Nazgûl, and a number of others where for me a particular objective was realised.

Favourite parts of the books? I think there are too many to list, really. I have been especially interested, to depict some of the somewhat overlooked scenes with the Ents, such as the Sacking of Isengard. The Tower of the Moon was an interesting challenge, as was my first panoramic painting of Ithilien, and the night scene in the Dead Marshes.

What is it about Tolkien that inspires so many people? I think it is mostly to do with how fully he engages the reader’s imagination. His own love of his story and its incredible verisimilitude, as set in the world he imagined, seems to powerfully inspire further creativity in his readers’ minds as well, whether they be artists, musicians, writers, craftspeople, scholars or whatever.

Thoughts on other Tolkien artists I prefer to focus on how Tolkien illustrating in general has created a kind of community of artists, who are each guided by their love of Tolkien and their sense of how they wish to express themselves in relation to the author’s descriptions of characters and other features of Middle-earth. The fans are very interested in the idea of faithful interpretations, but at the same time there’s a wide tolerance for a diverse range of styles and interpretations. The whole idea of illustrating Middle-earth has generated much discussion and different ‘schools of thought’, consistent with a powerful personal reaction to Tolkien among his readers.

The film I expect I will react on different levels. Partly it will be just as a fan of the medium; Tolkien¹s books are well suited to a film interpretation – if you can rise to the immense challenge. I will also be looking at the many set details, and approaches to each scene, the characters and whether I agree with their portrayals, the ways the director has adapted the story to film (all those controversial changes being so hotly debated), and much else. How and whether it comes to influence my future artwork remains to be seen…!

On illustrating Tolkien. When I interpret Tolkien, I feel genuinely at home with it and I derive great satisfaction from exploring all potential aspects of Middle-earth. With each new illustration I feel a little bit more of it is captured: characters, locales, atmosphere and drama. Also, it is always interesting to discover the ways that a picture can add new layers of meaning to a scene when the various elements of composition come together, and how unconscious associations find their way into the work.

The future: As well as just having completed the illustrated Silmarillion, Nasmith is working on the 2002, 2003 and 2004 calendars, each focusing on a different book in the trilogy. “There doesn’t seem to be any limit to the possibilities and as far as I can tell, I will be exploring them for some time to come.”

Researched and edited by k