So once again I’ve been bitten by the costuming bug.

I wanted to make myself a sort of coat/cloak type thing for the LARP, knowing that it sometimes gets rather cold at night out at the Huver’s. I still have a fresh pattern of Simplicity 9887 laying around, so I decided to have a go at View B. 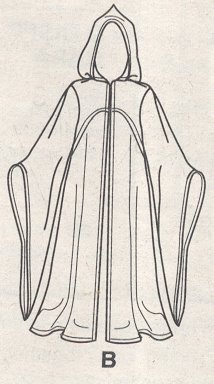 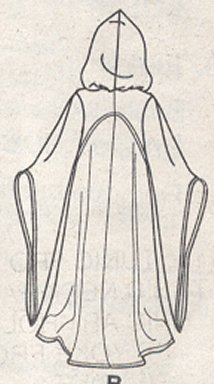 So I cut out the pattern peices, using some left over broadcloth I had and did everything except hem and add a frog closure at the neck. I also didn’t add the end peice for the cloak body, and just tailoerd the bottom slightly to scalop like a circle. Upon completing the mock-up, I noted something that really began to bother me. My coat/ cloak looked more like a Hogwart’s Uniform from Harry Potter than anything Ngalia and Peter Jackson created for Lord of the Rings. It could be the colours (As it’s mostly made of grey broadcloth, there is some purple broadcloth because I ran out of the grey) that was throwing me off. 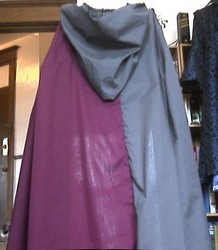 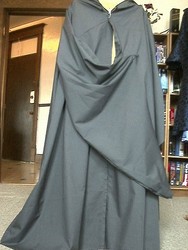 Now, I’m not keen on the yoke part, and I’m not keen on the direction of the yoke peices. So I basically taped the back part of the yoke (the front part is almost the same, save for the fact that the scoop for the neck is slightly deeper) to the main body of the cloak. I cut the yoke in the opposite direction, having the point of the yoke come to the middle of my chest and back on the opposite side.
I figure I am going to cut the piece off diagonally to get the yoke portion again, and add a half an inch for a roll over, then attach to the main body. 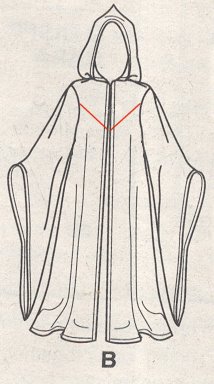 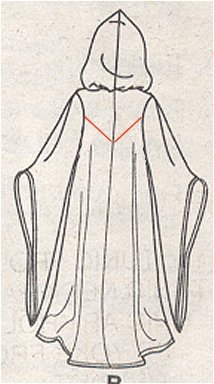 I made this coat/cloak thing out of triple woven rayon velvet, and will double the length of the hood piece so I can fold it over and have it line itself. I managed to get some silver embroidery thread, and embroidered on an “elf like” leafy pattern onto the yoke portion, after I added two or three frog closures, instead of the regular one.

When I got my fabric and started working on the pattern, I made the cloak/coat out of triple woven rayon velvet in navy blue. This stuff is so soft and so wonderful to work with, it’s like a dream! I nearly died and went to heaven when I got the first few stitches in.
Though, I screwed up the self linning hood, but thankfully, I had enough velvet to go back and do it again. The only other thing I had to do was let the velvet hang for about a week to let it adjust before I put the hem seams in.

Alright, so I have images now, thanks to Dallas over at Gemini Studios and his Digi Cam.

As you can see, I modified the Yoke pattern to have the diagonal portion face towards a point at the center seams, instead of under the arm seams. Eventually, I plan to add embroidery to the sleeves, hem, hood and yoke.
I learned embroidery stitches from Sharon B’s Stitches for Embroidery, and I got the webpage URL from my friend Willow.

I completed pictures of the coat/cloak thing, all embroidery work done, which took much time and gave me a cramp in my hand. I also managed to add some faux bearl beads as well to the embroidery potion, just to slightly off-set the silver embroidery thread. The fabric drapes wonderfully, even though the cloak/coat isn’t lined. It’s actually quite warm and well, as taking the pictures below, it was really windy and I was still warm enough. 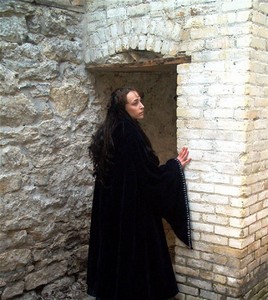 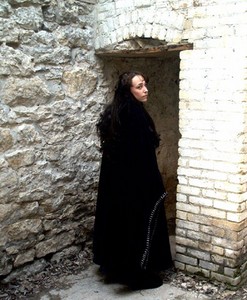 More pics on next page … 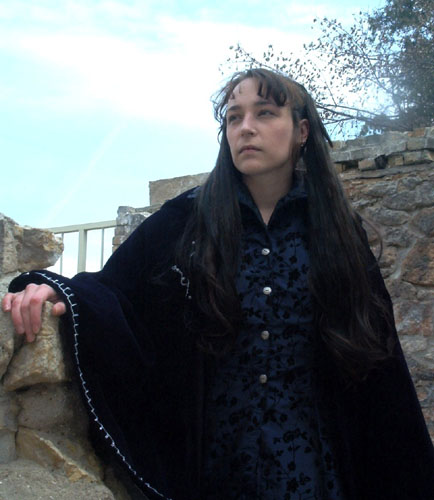 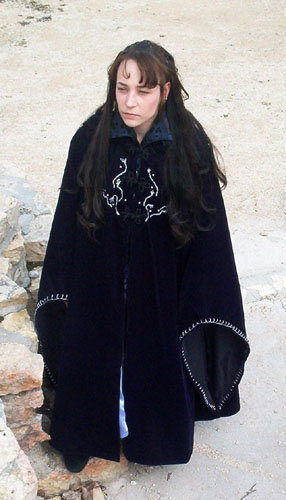 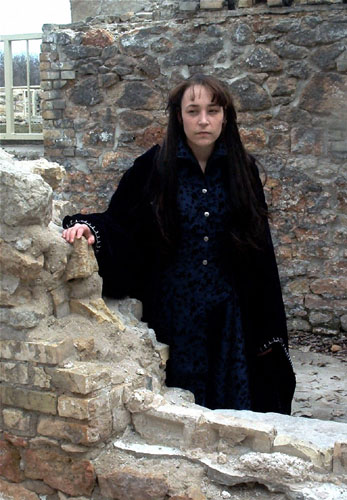