~Nessa~
"In dancing she delights, and she dances in Valimar on lawns of never-fading green."

Costumes: Farmboy’s Aragorn at the Battle of Hornburg 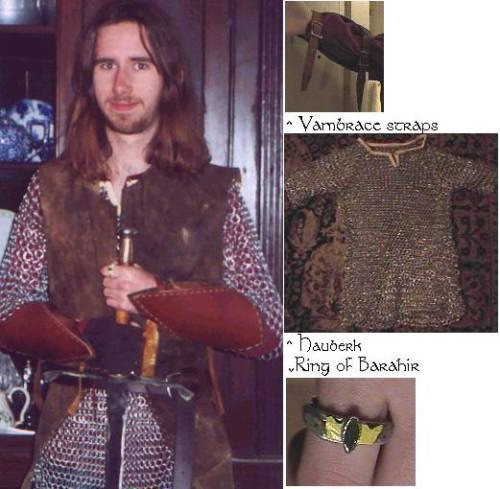 I wore this costume to the opening day of Return of the King. It consists of:


The chain-maille took the longest to make — 2 months to the day. I started with a roll of galvanized steel fence wire, which I found in hardware store. I then made a crank to wind the wire. The resulting coil was cut apart into individual rings using wire cutters. Using this method, I could make 100 rings from one coil. I then had to connect the separate rings using the European 4-in-1 style. The hauberk has riding slits in the front and back. Looking back, I wished I had made the rings smaller, because now that they are put together, I can see that they are too wide to stop arrows. (I have tested the shirt with arrows, and the arrows either go right through; or hit where the rings overlap, causing the arrow to bounce off and the rings to bend in the immediate area.)

The jerkin was made in about 2-3 months, though I was not working on it every night as in the case of the hauberk. I modified a deerskin vest my dad made back in the 60’s, took 2 panels out of the back, and added the tails to the bottom. The stitching was dry-rotting and the leather was rough so I had to wash and re-break the wet leather, and then restitch it together with artificial sinew. The 3 leather ties on the front came from a woven belt, which I cannibalized for straps. I stained it brown using walnut furniture stain.

I sewed the red shirt in a weekend, using a Simplicity pattern (so sorry I can’t remember the pattern number), using some cheap red fabric for the arms, and (accidentally!) a darker red for the body. This was because the amount of fabric I bought was for the shirt one size down from the one I wanted. Luckily I had some extra red fabric left over from another costume. It doesn’t match, but you don’t see the body much so I don’t worry.

For pants I just went to Goodwill and bought some black pleather pants for cheap.

Attention to details makes or breaks a costume!

The vambraces took maybe 2 or 3 weeks, though not working every night. These were made in two layers, the top layer of harder thick leather, and the bottom layer (including straps) from softer leather. I did these without patterns, and basically just drew out what looked like appropriate-sized diamonds, skinnier at the bottom. I used contact cement to glue the 2 layers together, and then stitched together with more artificial sinew. Buckles were sewn on, and holes punched in the straps. (if you make your own, be sure to arrange the straps so that if you hold your hand straight out from your body the straps will hang down, otherwise they will be flipping up in your face if you are running or fighting.)

The belt was bought at the dollar store, nothing fancy. Try to buy the longest belt possible, so that more will hang below the knot and look cooler. If I remember, Aragorn’s came down almost to his knees.

For boots I just pulled on a pair of brown Wellington-style riding boots.

The sword was made very quick, probably 2 weeks. If you don’t know about blacksmithing, you may be better off buying a replica or hiring a smith to make one for you. This one was made very fast using a car spring and flattening it with a trip-hammer. The cross-guard is wrought iron, the hilt came from part of a chair leg, and the pommel is brazed brass and a small doorknob.

The ring was made from a couple of extra maille-rings epoxied together. I based my design more from the original description from the books, instead of the ring from the films:

Well, my ring is more like two snakes with emerald eyes, heads beneath a golden crown, with a big emerald in the middle! I was in a hurry, so I quickly made all 4 pieces out of epoxy and glued them all together. (Ed. note: illustration is, of course, the film ring.)

Cut the fingers off a black glove and you’re done!

Since taking this picture, I have also made a sheath for the sword by making a wooden sleeve and wet-stitching leather around the outside.

The quote describing Barahir’s ring is, I believe, from the Silmarillion.