~Gandalf~
"...his long white hair, his sweeping silver beard, and his broad shoulders, made him look like like some wise king of ancient legend. In his aged face under great snowy brows his dark eyes were set like coals that could leap suddenly into fire." 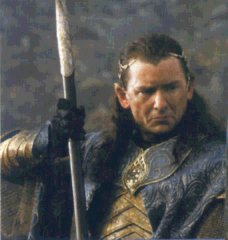 Pronunciation: eye'glos
Related Terms: Gil-Galad, Aiglos
The name is translated ‘Snow-point’ or, more literally, 'icicle'. The word itself can also mean 'Snowthorn' (a plant with white flowers) so the true meaning is debatable. 'Aeglos' is a Sindarin word.

Aeglos was Gil-Galad’s spear that he wielded at the Last Alliance of Elves and Men. None could stand against it, but he still met his death when he wrestled with Sauron, the Dark Lord.

*Note* There are two different spellings of the name of this particular weapon. Aiglos ('Snow-point') is the spelling used in the Lord of the Rings so if looking at it from a canonical point of view, it would seem that this spelling is preferred. Since the spelling seen in Aeglos ('Snowthorn') is also used for a plant which grew in Beleriand, it would seem that they should signify different objects, hence the different meanings.
Encyclopedia entry originally written by Hathaldir