~Elwing~
"Which is Star-spray, for she was born on a night of stars, whose light glittered in the spray of the waterfall of Lanthir Lamath." 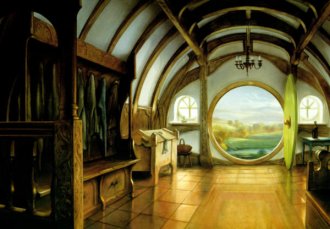 Bag End was excavated and built into The Hill at Hobbiton by Bungo Baggins and Belladonna Took, parents of Bilbo, using money from Belladonna's dowry.

It was a spacious dwelling,tiled and carpeted, with panelled walls and was luxurious compared with some. The drawing-room was lit by a large lamp with a red glass shade It had a round green door with a brass knob in the centre which opened into a large hallway with lots of pegs for visitors' hats and coats. From here a central tunnel wound into the hill with rooms on either side.

Like most hobbit houses, there was no upstairs, all the rooms being on the one level. There were bedrooms, bathrooms, cellars, pantries, wardrobes, kitchens and dining rooms. The rooms on the left side (going in) were the best ones, because they had deep-set windows looking out over the garden and meadows past it. There were fireplaces in most rooms.

Bilbo Baggins inherited Bag End from his parents, and he in turn left it to Frodo, his cousin. When Frodo left Middle-earth he bequeathed Bag End to Samwise Gamgee.
Encyclopedia entry originally written by Hathaldir