~Eowyn~
"Where is she? The woman who gave you that jewel." 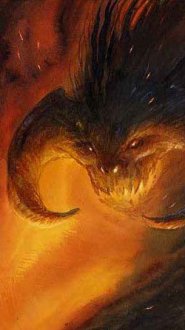 They were man-shaped, but fire and smoke streamed from them, and they were shrouded in shadow. They normally carried flaming whips. The question of whether they have wings is still hotly debated.

When Morgoth was attacked by the Valar in the War of Wrath, the *one remaining Balrog fled farther into Middle-earth and made its home in the deep places of the world, namely the Mines of Moria.

When Ungoliant trapped Melkor in one of her webs, it was the Balrogs that came to save him.

However, the Balrogs were not indestructible. Gothmog the Balrog, their Lord at one time, was killed by Ecthelion of the Fountain. Another was slain by Glorfindel of Gondolin. Durin's Bane, the Balrog of Moria, was killed by Gandalf the Grey.

*Note:
In The Silmarillion it says: "The Balrogs were destroyed, save some few that fled and hid themselves in caverns inacessible at the roots of the earth.", but in later writings of Tolkien's, in particular in his 'Letters', he tells us: "The Balrog is a survivor from The Silmarillion and the legends of the First Age. So is Shelob. The Balrogs, of whom the whips were the chief weapons, were primeval spirits of destroying fire, chief servants of the primeval Dark Power of the First Age. They were supposed to have been all destroyed in the overthrow of Thangorodrim, his fortress in the North. But it is here found (there is usually a hang-over especially of evil from one age to another) that one had escaped and taken refuge under the mountains of Hithaeglin (the Misty Mountains)."(Letter 144)

Therefore, here we have stated that the only Balrog remaining was the one that Gandalf kills, because it seems to have been Tolkien's latest idea.