Find Middle-Earth in your surroundings, with the help of the Last Homely House. 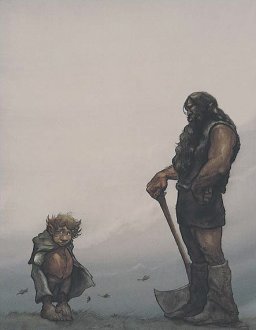 Related Terms: Grimbeorn, Carrock, Beornings
A man, a skin-changer, who lived near the western edge of northern Mirkwood in the late Third Age.

Beorn was a huge, muscular man with a black beard. He was taller than Gandalf and possibly over 7 feet. He dressed simply in a knee-length wool tunic, with arms and legs bare. When first met with in The Hobbit he was reclusive and suspicious, with few friends, seldom inviting anyone into his house. Gandalf warned that he was terrible when angry, in fact downright dangerous, and certainly not to be trifled with. Yet Beorn made the company welcome, enjoyed their encounters with goblins and wargs, and declared that he would be friendlier if all had such a good tale to tell.

Beorn descended from those of the House of Hador who did not cross the Misty Mountains on their journey west long before, but settled in the Vales of Anduin. He was a vegetarian and lived simply, owning no valuables, eschewing ‘made things’, and drinking from wooden bowls. The only metal he had was his knives and axes. He lived in a great wooden hall surrounded by fenced lands where he grew fields of clover and other flowers for his hives of huge bees. He also kept horses, sheep and cattle which supplied him with butter, cream and cheese and some even served him as house-servants within the hall. Gandalf described them as Beorn’s ‘children’.

As a skin-changer Beorn took the form a of a great black bear. Some said he descended from ancient bears of the mountains, but Gandalf knew he came from the first men to settle the area. He had named the Carrock a stone outcrop on the Great River where he often sat almost in trance, and there was evidence that he could summon the aid of other bears/men. Yet Gandalf said that he was ‘under no enchantment but his own.’

Beorn had not met Gandalf before. He had heard of Thorin and was well acquainted with the habits of wargs and goblins. He gave Thorin and Company information about Mirkwood and suggested they take the Elf Path that opened further north. This gave more time since Goblins would not cross the Great River, (Anduin) for 100 miles north of the Carrock. Beorn provided ponies for the journey, but only to the forest edge. In addition he gave them food for weeks, flour, nuts, dried fruit, honey, twice-baked cakes, water-skins, and bows and arrows. As they travelled north Bilbo saw Beorn shadowing them in bear shape.

Later Beorn came alone to the Battle of Five Armies in bear shape grown to gigantic size. No weapon could harm him as he waded into the fighting. Locating the goblin Bolg he crushed him. The goblins turned tail. Then, finding Thorin pierced with spears, Beorn lifted him and bore him from the battlefield.

After the battle Beorn accompanied Gandalf and Bilbo on their journey round the north of Mirkwood, the Elf Path still being too dangerous. Before heading home they spent Yule with him, the hall filled with visitors and Beorn obviously becoming more sociable. Later he became a great chieftain between the mountain and wood, and all his line, the Beornings, had the power to take bear’s shape. Beorn’s son, who succeeded him was remembered as Grimbeorn the Old.