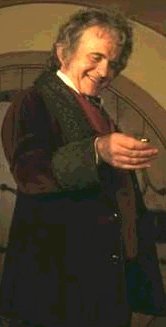 Bilbo lived in Hobbiton at Bag End, the comfortable hobbit-hole he inherited from his father, a respectable well-to-do hobbit. He was very polite, and friendly in a guarded English sort of way, smoked a pipe and was expert at blowing smoke-rings. He could also bake a good seed-cake.

Bilbo was an educated bachelor, content with his books and walks in the countryside. He liked maps and owned one of the Country Round. He organised his life on an Engagement Tablet and could be very flustered if things did not go to plan. Yet Gandalf sensed a depth to him and for that reason chose him as burglar for Thorin and Company on their quest to the Lonely Mountain, as recounted in Bilbo’s memoir The Hobbit or There and Back Again.

Beneath his prim exterior, Bilbo inherited a strain of Tookish eccentricity from his mother. He was tempted by the idea of adventure and wearing a sword. Wanted to be thought fierce. Yet it was in great doubt and flurry that he left one spring morning in SR 1341 to join Thorin and Company minus his hat, hankie, and stick, and with no money at all.

Bilbo was wet, miserable and grumpy at start of their journey, but after a close encounter with trolls was issued with a short sword from their hoard which he later named Sting. His confidence grew, as did his fascination with elves during a short stay with Elrond at Rivendell after which the company headed east over the Misty Mountains.

High in a pass the company were captured by goblins, (orcs) and in escaping, Bilbo became separated from the company and lost in the maze of tunnels. There he found a plain gold ring recently slipped from the finger of Gollum, an ancient and mysterious person, who lived alone in the deepest cavern. Gollum challenged Bilbo to a game of riddles to decide whether he would kill and eat him but Bilbo won with a question only he could answer, “What have I got in my pocket?” It was the ring.

Not trusting Gollum to honour the game, Bilbo drew his sword, but overwhelmed by sudden compassion, he forbore to kill him. When Gollum discovered the loss of the ring he set off in search of it and Bilbo followed hoping to find the way out. From Gollum’s mutterings he discovered that the ring conferred invisibility, and used it to evade capture and escape. Behind him Gollum’s wail of loss echoed through the caves.

Reunited with Thorin and Company, Bilbo shared their experiences with eagles and wolves. They visited Beorn a reclusive “skin-changer” who farmed in the Vales of Anduin after which they travelled on foot through Mirkwood. Bilbo acquitted himself well when they were attacked by Giant Spiders, killing many and rescuing the dwarves. He felt fiercer and bolder and named his sword Sting. When the dwarves were captured by the Mirkwood Elves, Bilbo used the ring to become invisible, entered the halls of the Elvenking and freed the dwarves.

Arriving at the Lonely Mountain, Thorin’s ancient home, but long the lair and hoard of the dragon Smaug, they managed to open the secret side-door and Bilbo was sent down the tunnel to Smaug’s cavern. Alone in the darkness of that tunnel, Bilbo suffered his greatest fear, and knew afterwards that the bravest thing he ever did was to carry on. Finding Smaug asleep Bilbo stole a cup from his hoard. On a second trip Bilbo spoke with Smaug and by flattery managed to see a weak spot in his jewelled breast, which later enabled Bard the Bowman to shoot him out of the sky.

With Smaug dead there was a confrontation between Thorin and the armies of Men and Elves who had various claims on the hoard. Hoping to avert bloodshed Bilbo smuggled the Arkenstone out of the mountain and handed it to the Elvenking as a bargaining piece. It did not work, but before they could engage, an army of goblins arrived and the opposing forces became allied in the Battle of Five Armies which they won.

Bilbo reckoned that battle to be his most terrible experience. He accepted only a modest reward in gold and silver, and was named elf-friend by the Elvenking. Thorin was mortally wounded, but thanked Bilbo and blessed him before he died.

Returning home after a year’s absence Bilbo found his home and effects being auctioned by his lawyers Grubb, Grubb and Burrowes, on the assumption that he was dead. Using some of his treasure to buy them back, he settled down peacefully for the next 60 years, writing his memoirs and visiting elves. He said nothing of the ring, unaware of its perilous potential.

When Bilbo failed to age, Gandalf became suspicious of the ring’s nature, and persuaded Bilbo to give it up. Thus in SR 1401, Bilbo held a huge birthday party, and vanished before the eyes of his family and friends, leaving wealth, home and the ring to his cousin Frodo whom he had adopted as his heir.

Bilbo went to live with the elves at Rivendell and for twenty years wrote poems, stories of Elf-lore, as well as his memoirs, "There and Back Again" and his three-volume scholarly work, "Translations from the Elvish".

Soon after Bilbo’s departure Gandalf confirmed that the ring he found was the One Ring lost by the Dark Lord Sauron and with which he had hoped to rule the earth. Thus began the events of the War of the Ring. Afterwards, in SR 1421, at the age of 131 years, Bilbo sailed with Frodo to the Undying Lands of the West.
Encyclopedia entry originally written by admin