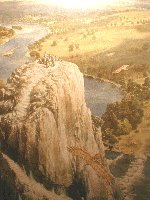 Related Terms: Beorn, Anduin
A high rock outcrop dividing the River Anduin 40 miles or so north of the Old Ford. The stream to the west of the Carrock was deep and swirling beneath a low cliff. To the east the stream was shallow enough to ford.

The Carrock stood in land occupied by the Beorn, the Skin Changer, who had named it, and carved steps to the summit, which afforded a wide view of the surrounding grass-lands. At the base of the steps a small dry cave with pebbled floor afforded shelter.

After their escape from Wargs and Goblins, Thorin and Company were carried by the Eagles to the flat top of the Carrock, from whence Gandalf led them to the hall of Beorn.