~Legolas Greenleaf~
"Shall I describe it to you, or would you like me to find you a box?" 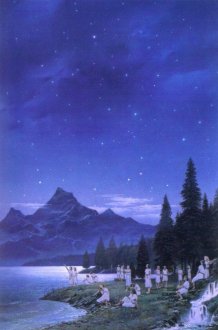 Related Terms: Water of Awakening
"By the starlit mere of Cuiviénen, Water of Awakening, they rose from the sleep of Ilúvatar; and while they dwelt yet silent by Cuiviénen their eyes beheld first of all things the stars of heaven..."

Cuiviénen was the place where the Elves first woke after Varda kindled the stars in the sky; during the Years of the Trees. It lay in the far East, on the shores of the Inland Sea of Helcar, near the Orocarni mountain range. Cuiviénen had (presumably) disappeared during the changing of the reshaping of Arda in later Ages.

The Eldar dwelt in the Wild Wood which surrounded Cuiviénen until the Summons of the Valar, where they were then sundered from their Avari kin.
Encyclopedia entry originally written by FÃ­riel