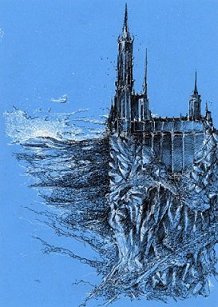 Related Terms: Greenwood, Mirkwood, Necromancer, Wood of the Greenleaves
A hill in the south west of Greenwood the Great, fortified and occupied by Sauron for several periods from around TA 1050. Its name means Hill of Sorcery.

It was around TA 1050, that an evil presence began to make itself felt in the south of the great forest of Rhovanion, known as the Greenwood. The forest became dark and dank and filled with evil creatures. Men began calling the forest Mirkwood and realising the evil emanated from Dol Guldur, they called the being within it
the Necromancer, or the Sorcerer of Dol Guldur..

Over the next thousand years the evil spread until all of the forest, except for the portion in the north under control of the wood elves, became a vile, dark, and unsafe place and the wise began to suspect that the Necromancer was Sauron reasserting himself in a new form.

Gandalf entered Dol Guldur secretly in TA 2063 but the Necromancer had escaped. By TA 2460 he had re-entered with increased power and strenghthened its fortifications.

Gandalf again entered Dol Guldur in TA 2850, at great risk, and found proof that the Necromancer was indeed Sauron. In the deep dungeons he found the dwarf king Thrain II who as he was dying gave him a map and the Keys of Erebor.

In TA 2941 The White Council drove Sauron from Dol Guldur but he had already prepared for this and moved to the Barad-dûr in Mordor. From there, in TA 2951 he sent three of the Nazgûl to occupy Dol Guldur and prepare its forces. During the War of the Ring these forces attacked Lothlorien three times but were repelled. Finally, after the One Ring was destroyed, Celeborn led a force from Lothlorien to attack Dol Guldur and Galadriel herself threw down its walls.

The elves of Lothlorien, along with the wood-elves of Thranduil's kingdom in the north woods, finally cleansed Mirkwood of evil and renamed it Eryn Lasgalen, The Wood of the Greenleaves.

Then Lothlorien took control of the south of the woods, including the ruins of Dol Guldur, and founded there the elf homeland of East Lorien.
Encyclopedia entry originally written by PotbellyHairyfoot