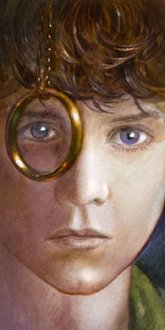 Related Terms: Baggins, Ringbearers, Fellowship
Son of Drogo Baggins and Primula Brandybuck, Frodo was born on September 22, 2968 of the Third Age. He had no brothers or sisters.

When he was just 12, he lost both his parents in a boating accident on the Brandywine River. From then on, he lived with his cousins and extended family in Brandy Hall. Nine years after his parents died, his cousin Bilbo Baggins adopted him, and he moved into Bag End. Although Bilbo referred to him as a nephew, Frodo was actually a first cousin once removed (on his mother's side) and a second cousin once removed (on his father's side).

Bilbo's adopting him as an heir annoyed another branch of the family, the Sackville-Bagginses. They (especially Lobelia) had been waiting to inherit Bag End.

He lived with Bilbo and was said to have inherited some of his peculiarities. It was rumoured that they went to visit the Elves together, that Frodo had learned Elvish and that Frodo had read Bilbo's account of his adventure with the Dwarves.

When Bilbo left the Shire in 3001 of the Third Age, Frodo inherited his whole estate, including Bilbo's magic ring.

Seventeen years later, Frodo left the Shire on his and Bilbo's birthday, because Gandalf had told him that the ring was actually Sauron's One Ring. He sold Bag End to the Sackville-Bagginses, and set off to Crickhollow where he had a small cottage as a decoy.

After some disastrous short-cuts and meeting Tom Bombadil, Frodo and his companions (Meriadoc, Peregrin and Samwise) got to Bree. Gandalf was not there, but they met up with a Ranger named Strider, and followed him to Rivendell.

At Weathertop Frodo was stabbed in his left shoulder by one of the Nazgûl, and only got to Rivendell just in time for Elrond to heal him.

At the Council of Elrond, held once he was well, he was declared the Ringbearer and one of the Fellowship of the Ring. Before they left, Bilbo gave Frodo his sword, Sting and his mithril mailshirt.

In Lothlórien, Galadriel gave him a phial with the light of Eärendil's star, as a light when all others go out.

Eventually, he and Samwise separated from the rest of the Fellowship, and continued on their own. The creature Gollum followed them, and they made him their guide.

When the time came for Frodo to drop the ring into the Cracks of Doom, he could not do it, and claimed the ring for himself. Gollum then attacked him, and got the ring by biting off Frodo's finger. Gollum then fell backwards into the fire.

Frodo and Sam were rescued by the Eagles, and were greatly praised by all when they had rested and recovered.

For a time after the War of the Ring, Frodo was the Mayor of the Shire. He never married, and that added to the list of things other hobbits thought was 'odd' about him.

He passed over the Sea with the last of the Ringbearers on September 29, 3021 of the Third Age.

*Note* It is possible that Frodo did not leave with the last of the Ringbearers because there is a tradition handed down among Samwise's family that he also sailed over sea, and into the west years after Frodo left. The problem with this is that it is not stated that it happened for certain, but is only said to be a tale that was handed down from Elanor the Fair, Samwise's daughter, who was the last to see him.
Encyclopedia entry originally written by Hathaldir