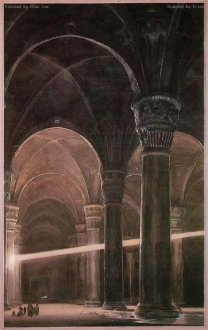 Related Terms: Khazad-dÃ»m, Dwarves, Balrogs
Sindarin word meaning Black Chasm (or Pit). The name given by the Elves to the great dwarf underground city and mine-complex of Khazad-dûm after TA 1980 when the dwarves disturbed a Balrog and were driven out. Moria is first mentioned in the very first chapter of The Hobbit as the place where Thorin’s grandfather Thror was murdered. Not much more is said of it until its history is told in The Lord of the Rings.

The tunnel system of Moria was on many levels, and stretched for several days’ journey beneath the Misty Mountains with gates at both east and west. After the Dwarves left in TA1981, the mine became home to Orcs of Sauron who, despite a recolonisation attempt by Balin were still dominant when the Fellowship, stalked by Gollum traversed it in TA 3019. They discovered Balin’s tomb in the Chamber of Mazarbul but disturbed the Balrog once again. Eight members of the Fellowship escaped across the Bridge of Khazad-dûm where Gandalf held the Balrog, at bay but was lost falling into the chasm with it and the shattered bridge.

Although in the Third Age the names Moria and Khazad-dûm seem interchangeable, the name Moria only truly applied after it was deserted by the Dwarves. It is not said whether the dwarves returned to the mines during the Fourth Age.