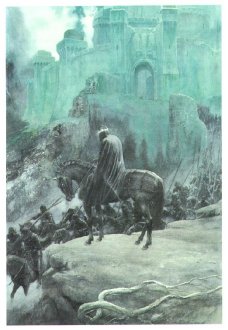 The Nine were led by the Witch-King of Angmar and Khamûl the Easterling was second-in-command.

The Nazgûl were once Men (some of them Númenóreans), who wanted power above anything else. Sauron harnessed this weakness and gave them the Nine Rings of Power and thus enslaved them. The power of the rings transformed their lust for power into the obedient service to Sauron. Their will was taken away, replaced by Sauron's evil and malice.

Nazgûl first appeared around year 2250 of the Second Age, besieging the Middle-Earth along with other foul creatures. They went into the shadows after Sauron was defeated in the War of the Last Alliance.

They emerged once again around year 1300 of the Third Age while the Necromancer was rebuilding his empire and strength. Some dwelt in Dol Guldur and some of them rebuilt Barad-dûr with the horde of other creatures of Sauron. In year 3017 they were sent out in search of the One Ring, and almost captured Frodo more than once. They were driven away with the combined power of Lord Elrond and Gandalf by the Ford of Bruinen.

The Nazgûl perished when the ring was destroyed in 3019, as they could not exist without Sauron's will.

They mostly rode clothed in black cloaks and on black horses through Fellowship of the Ring, but in Two Towers and Return of the King, they flew on winged beasts. All but the Witch-King of Angmar did not like light, and they had an unexplained fear of water (as it was shown by the Ford of Bruinen).

Their chief weapon was terror which was greater when they were invisible. They also had morgul-blades. These swords would give a wound that would swell with poison and make the person pass into the shadows thus become like the Nazgûl themselves. Another weapon was the Black Breath. This would fill anyone it touched with hopelessness and terror. Although the athelas plant has been known to cure victims of the Black Breath, leaving it untreated too long could result in unconsciousness, despair, and overall, dominion over the victim's free will.
Encyclopedia entry originally written by Abraon