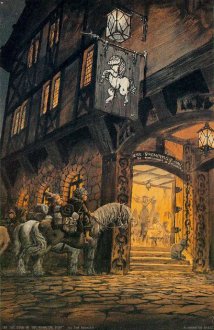 Related Terms: Bree, Barliman Butterbur
A popular old inn located in the town of Bree. It was a meeting place for the idle, the talkative, and the inquisitive inhabitants, large and small, of the four Shire villages, and also a resort for rangers and other wanderers. It is the place where Frodo first met Strider.

The innkeepers of the Prancing Pony were the family of Butterbur, and the ale served by the tavern was highly regarded. However, the inn's main attraction for the locals was the conversation to be found in the public rooms whenever travellers stayed the night.

The inn was built of timber on three storeys, with two wings running back from the road into the hill beyond, enclosing a courtyard equipped with stables. Hobbits were catered for by specially-fitted rooms, close to the ground with round windows.
Encyclopedia entry originally written by tsproffitt