~Mîm~
"They (the Petty Dwarves) loved none but themselves, and if they feared and hated the Orcs, they hated the Eldar no less, and the Exiles most of all." 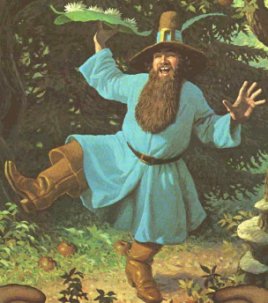 A mysterious stranger that was married to Goldberry, the river-daughter. He first appeared wearing yellow boots, a blue jacket and a battered hat with a blue feather in it. His faced was creased with laughter lines, he had blue eyes and a long brown beard.

He saved Merry and Pippin from Old Man Willow when he was out collecting lilies for Goldberry. He lived in the Old Forest, near the Withywindle. He invited the four hobbits to stay in his house, and they went with him.

He calls himself Eldest, and said that he was there before the rivers and the trees, before the seas were bent, and he saw men arrive on the shores of Arda. The One Ring had no power over him, but he could not be entrusted with it, as he might lose it, thinking it just a trinket.

The hobbits left his house to continue on their journey, but he saved them again when they got trapped by a Barrow-wight in the Barrow Downs. He then rode with them to the edge of his land, on his pony, Fatty Lumpkin.
Encyclopedia entry originally written by Hathaldir