Index
Home » Literature Articles » The Silmarillion » 10. Of the darkening of Valinor

10. Of the darkening of Valinor

Melkor meets up with Ungoliant, and the two of them kill the Two Trees of Valinor. Fëanor returns to Valinor.

– Melkor eventually escaped to the south of Aman, to the region of Avathar – whose “long and mournful shores stretched away into the south, lightless and unexplored”.
– There he met Ungoliant, the ancestor of Shelob.
– Her origins are unknown, but some held that she came down from the darkness that lies about Arda.
– She was corrupted to Melkor’s service, but disowned her master “desiring to be mistress of her own lust, taking all things to herself to feed her emptiness”.
– For more information on Ungoliant, please see our library article here. 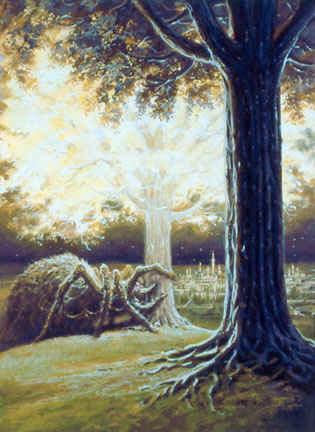 – Melkor and Ungoliant plotted his revenge against the Valar, but Melkor had to persuade Ungoliant to help with the offer of whatever her lust demanded when their task was complete.
– She then wove a cloak of Unlight around them, hiding them in darkness, and the two of them journeyed back to Aman.
– They came to Valmar at a time of festival, when all the Valar and Eldar, Vanyar and Noldor were on Taniquetil.
– Manwë also commanded Fëanor’s to attend and he came to Taniquetil, though dressed plainly and not in festival garb. He left the Silmarils in Formenos, and Finwë and the other Noldor in exile remained in Formenos too, not wanting to come to Valmar when Fëanor was unwelcome there.
– Fëanor and Fingolfin met, and Fingolfin released his brother from his debt. “”Half-brother in blood, full brother in heart will I be. Thou shalt lead and I will follow. May no new grief divide us.” “I hear thee,” said Fëanor. “So be it.”
– The Unlight of Ungoliant rose up to the roots of the Trees, and Melkor smote each Tree with his spear. Ungoliant the drained the Trees of their sap and the poison within her went into each Tree and withered them. Still thirsty she went to the Wells of Varda and drained them dry.
– After that, Ungoliant swelled to a shape so vast and hideous that even Melkor was afraid.

– Valinor was left in silence and darkness – a darkness that seemed almost to be alive, made by malice out of Light.
– But Manwë looked out and his eyes alone pierced the darkness and saw Melkor and Ungoliant escaping northwards.
– Oromë and Tulkas led the pursuit of Melkor, but when the riders of the Valar came to the cloud of darkness, they were blinded, and scattered. The sound of Oromë’s horn faltered and failed, and Tulkas was as one caught in a black net at night – powerless and frustrated.

– By the time the Darkness had passed, Melkor had left the realm and could no longer be tracked down. His vengeance had been achieved.