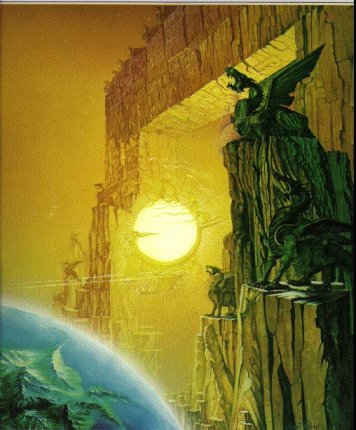 After Morgoth and Ungoliant desecrated and destroyed the Two Trees of Valinor, Yavanna coaxed one last flower of silver from Telperion, and one fruit of gold from Laurelin. From these, the Sun and the Moon were created, along with vessels to hold them. Varda then gave them the power to traverse the lower regions of Ilmen, and set them to voyage upon appointed courses above the Earth from West to East.

The Valar appointed a maiden called Arien to guide the vessel of the Sun. In the days of the Two Trees, Arien had previously tended the golden flowers in the gardens of Vána and watered them with the dews of Laurelin.

Arien was chosen for her task because she had not feared the heats of Laurelin, and as she had been from the start a being of fire, she was not hurt by them.

“Too bright were the eyes of Arien for even the Eldar to look on, and leaving Valinor she forsook the form and raiment which like the Valar she had worn there, and she was as a naked flame, terrible in the fullness of her splendour.” The Silmarillion

Tilion was greatly attracted to her brightness, and he veered the Moon out of its initial course to see her more closely, even though the flame of Anar, the Sun, scorched him.

Even Morgoth feared Arien, and he dared not come near her. He hid himself and his servants from her bright gaze, staying away from the Sun in the shadows.

The Book of Lost Tales tells us that the name of Arien’s forebear was Urwen, while in Morgoth’s Ring it was Úrien.

Morgoth’s Ring also tells us that Tilion had loved Arien in the days of the Trees, but he had pursued her in vain as she was a holy spirit of greater power, and she wished to be ever virgin and alone.

The only other note concerning Arien is also found in Morgoth’s Ring (p405), and concerns Melkor. “Melkor could not ‘beget’ or have any spouse (though he attempted to ravish Arien, this was to destroy and ‘distain’ her, not to beget fiery offspring)'”.