~Mandos~
“He is the keeper of the Houses of the Dead, and summoner of the spirits of the slain.”

After many years of comparative peace after the Dagor Aglareb, during which the Elves became numerous and strong, Fingolfin pondered once more about an attack on Angband. But most of the Noldor were content to leave the impasse as it was, and not to risk the wrath of Morgoth. Of the lords of the Noldor, only Angrod and Aegnor sided with their King in favour of action.

However, while they were deciding what to do, Morgoth gathered his forces and sent rivers of flame and fire down from Thangorodrim, and poisonous gases rose from the Mountains of Iron. Ard-galen was utterly despoiled, and became a deserted waste, then being known Anfauglith, the Gasping Dust. Many of the Noldor died in that burning, and it marked the start of the Fourth Battle of Beleriand, the Dagor Bragollach.

Glaurung the golden was at the front of Morgoth’s host, leading Balrogs and innumerable Orcs. They broke the Siege of Angband and assaulted the Noldor, as well as any allies who were with them (including grey-elves and Men). This sudden onslaught scattered the forces of Fingolfin, the grey-elves fleeing south – many to Doriath, but some to Nargothrond or Ossiriand.

The Dagor Bragollach proved absolutely devastating to the Noldor, and ended only when the forces of Morgoth retreated somewhat, having the broken the back of the Elven defences – and their confidence.

The war’s effect on the House of Fingolfin

– Fingolfin and Fingon’s hosts took great losses, and were driven back to the fortresses of the Ered Wethrin.
– Hador and Gundor of the Third House of the Edain fell defending the rearguard of Fingolfin.
– Hithlum itself remained unconquered, but Fingolfin was parted from the other Noldor by the enemy.

The war’s effect on the House of Fëanor

– Nearly all the eastern marches were taken by Morgoth’s hordes though Maedhros managed to hold his fortress of Himring. Many of the people of Dorthonion and the eastern Marches rallied to his flag, as did Maglor, and for a while he managed to help hold the Pass of Aglon.

“Maedhros did deeds of surpassing valour, and the Orcs fled before his face; for since his torment upon Thangorodrim his spirit burned like a white fire within, and he was as one that returns from the dead.” (Silmarillion, Of the Ruin of Beleriand and the Fall of Fingolfin)

– Celegorm and Curufin were defeated in the Pass of Aglon, and they fled to Nargothrond to shelter with Finrod.

– Orcs overran Lothlann, passed through Maglor’s Gap, and destroyed all his lands between the arms of the Gelion.
– Caranthir’s lands were also destroyed, with Orcs taking the fortress on Mount Rerir and defiling Lake Helevorn. He fled, and joined his people to the scattered folk of Amrod and Amras. The combined horde then went southwards, past Ramdal, and maintained a watch upon Amon Ereb.

The war’s effect on the House of Finarfin

– Angrod and Aegnor were slain and Finrod escaped death only through the aid of Barahir. This formed the start of the alliance between Finrod and the House of Bëor, symbolised by the gift of the Ring of Barahir.
– Orodreth defended Tol Sirion.

The Fall of Fingolfin

By the end of the battle, it seemed to Fingolfin that all around him the Noldor were spiralling towards a bitter defeat that would signify the end of all their Houses. In despair he mounted upon Rochallor and rode forth alone to Angband.

“He passed over Dor-nu-Fauglith like a wind amid the dust, and all that beheld his onset fled in amaze, thinking that Oromë himself was come: for a great madness of rage was upon him, so that his eyes shone like the eyes of the Valar.” (Silmarillion, Of the Ruin of Beleriand and the Fall of Fingolfin)

Praise indeed – for the Vala Oromë was a particular foe of Morgoth:

“there Oromë would train his folk and his beasts for the pursuit of the evil creatures of Melkor.” (Silmarillion, Valaquenta)

“Then the sleeping earth trembled at the beat of his golden hooves, and in the twilight of the world Oromë would sound the Valaróma his great horn upon the plains of Arda; whereat the mountains echoed, and the shadows of evil fled away, and Melkor himself quailed in Utumno, foreboding the wrath to come.” (Silmarillion, Of the Beginning of Days)

Tolkien only ever referred to one other person as being like Oromë – and that was Théoden as he rode to his death at the Pelennor Fields. Fingolfin’s desperate charge has the same feeling as Théoden and the Rohirrim’s ‘death and glory’ charge – both were described as fey, both were sure that they went to their deaths, and both were a willing sacrifice for their people.

What distinguishes Fingolfin from Théoden is that Fingolfin didn’t need to ride to fight Morgoth. In Théoden’s case he had to be at the head of the army, giving the Rohirrim behind him courage and strength. Fingolfin’s charge was more of a suicidal impulse, which was pretty much guaranteed to leave his people kingless, and deeply wounded by his death. He left his people to face Morgoth without him.

But in his final deed, Fingolfin showed some of the Noldorin spark of life that was so prevalent in his half-brother, and he rode to Angband, sounded his horn, and challenged Morgoth to come forth to single combat.

“[Morgoth] issued forth clad in black armour; and he stood before the King like a tower, iron-crowned, and his vast shield, sable unblazoned, cast a shadow over him like a stormcloud. But Fingolfin gleamed beneath it like a star; for his mail was overlaid with silver, and his blue shield was set with crystals; and he drew his sword Ringil, that glittered like ice.” (Silmarillion, Of the Ruin of Beleriand and the Fall of Fingolfin) 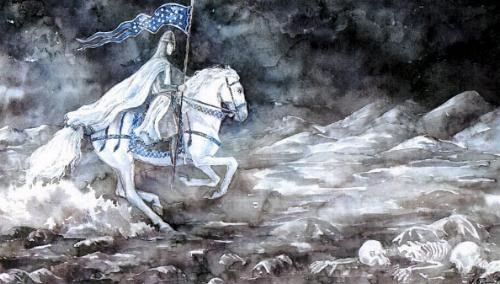 Morgoth came forth, attacking Fingolfin with Grond, the Hammer of the Underworld. Fingolfin managed to injure the Vala seven times before he was borne down by Morgoth’s shield. Three times was he brought to his knees, and three times he rose up to fight again, but eventually he fell backwards at the feet of Morgoth, and Morgoth ended his life. With his last desperate stroke, Fingolfin hewed the foot of the Dark Lord with Ringil, and black blood gushed forth.

“Thus died Fingolfin, High King of the Noldor, most proud and valiant of the Elven-kings of old.” (Silmarillion, Of the Ruin of Beleriand and the Fall of Fingolfin)

Fingolfin died a hero’s death, the only one of the Children of Ilúvatar to injure a Vala. After he died, Thorondor came swooping down to rescue his body from the wolves of Morgoth, and his body was laid on a mountain top that looked north upon Gondolin. Turgon later built a cairn over his father.

In his challenge and death, Fingolfin echoed the actions of Fëanor many years before. But their motives could not be more different. Fingolfin’s charge showed the essence of doom-laden courage – going forth to fight evil even without hope of victory. Fëanor’s charge, on the other hand, was full of pride, anger and self-interest. Fingolfin’s death seemed courageous – in the best traditions of chivalry – and wholehearted. Fëanor’s seemed a waste, a life thrown away through madness and arrogance.