Home » Middle Earth Articles » The Maiar » Saruman of Many Colours – yet another Ring-maker?

Saruman of Many Colours – yet another Ring-maker?

In the history of Middle-earth there are two baddies which we mostly focus on: Morgoth, and his servant who later became as evil and terrible as his master – Sauron. Both did fell deeds that harmed Arda and Middle-earth in unthinkable ways, ruining the purity and innocence of the world as it is. It is generally known that Sauron’s most evil deed was when he created the One Ring – the Ruling Ring.

With that he was able to enslave the free peoples of Middle-earth and thereby gain dominion of the lands. But he was not the only one to have created a Ring – or at least others have been referred to as having done the same.

Morgoth, the mightiest of the Ainur, who turned away from Ilúvatar, is also said to have had a Ring, though not an actual physical Ring : Arda is generally referred to as his Ring. When Arda was still in its Spring and vulnerable to outside interference, Morgoth made a great deal of his power be part of it, forever ruining Arda, marring it with his evil, tainting it. Morgoth as an individual was left with less power, but on the other hand, a part of him would from thenceforth run through every part of the world and, while there, his power would increase and he became – as Sauron to his Ring – bonded with it; one cannot endure without the other, if one is destroyed, so will the other.

With this tiny introduction let me then lead your thoughts unto the star of these scribblings. Because there is another one who tried out for dominion and power, and though perhaps he failed, he did indeed come pretty close. Saruman the White – former Head of the White Council and supposedly the greatest of the Istari who came to Middle-earth. Mightiest as were Morgoth the mightiest of Ainur and in turn also Sauron, one of the most potent and powerful of his order. Coming to Middle-earth with the other Istari sent to help the free peoples of Middle-earth, he was corrupted somewhere on his road and the lust for the Ring awoke in his heart.

Perhaps Saruman still thought of himself as uncorrupted, perhaps he was blinded by the power of the Ring and forgot that in most matters the way you achieve something is equally important to actually achieving it. What is known though, is some of the things said by Saruman. Something that makes one wonder if it is only the Ring that is at work or if other things have also been done. For in The Council of Elrond (FotR Book I) it is told by Gandalf that he is supposed to have said:

“…I am Saruman the Wise, Saruman Ring-Maker, Saruman of Many Colours!”

And then Gandalf notices that Saruman’s robe is not made of white cloth, but woven of threads of many colours and only appears to be white due to the mix – the shininess and glinting. What is it all supposed to be? What Ring is it that Saruman boasts to have made? A Ring seemingly powerful but never heard of before nor later. Could it be that what he refers to is not an actual physical object but something else, something equally abstract like the Ring of Morgoth, Arda?

But what could his Ring be, and what would he use it for? The quote suggests one thing. Saruman the White has become Saruman of Many Colours – his robe is made of threads of many colours. Colours appear to be something of importance to the Istari, because when Gandalf returns as Gandalf the White and talks with Saruman in his tower, after the Ents have messed up his domain, he tells Saruman that:

“I am not Gandalf the Grey, whom you betrayed. I am Gandalf the White, who has returned from death. You have no colour now, and I cast you from the order…..”

Of course much has happened previous to this: Saruman has himself forfeited his white colour but he also took another, or many colours. It is obvious then that, when reincarnated, Gandalf got the power to cast him out of the order of the Istari – Saruman had failed. But was it “only” the corruption that made him “worthy” of expulsion or was there something else? Had he perhaps violated other laws, had his betrayal been deeper than shown on the outside? And if so, could it have something to do with his many-colouredness? 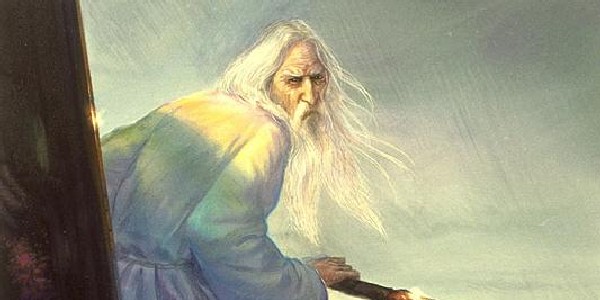 A theory, however far-fetched, is that it might be that there is more to Saruman’s comment than mere boastings. That he did indeed try to make his own Ring – a Ring of the Istari, the power of the Istari. By weaving a rope with threads of all the colours, he would also use the colours of the other Istari, the four others that we know of, but also others, if others there were, as it is implied in Of The Istari in Unfinished Tales. If the colours are important, if they show the singular traits and powers of each of the Istari, wouldn’t the making of a robe that contains all the colours somehow bind all the powers to the wearer of that robe, the wielder of that colour?

Could it be – like the One Ring and its connections with the other Rings of Power – that by wearing the many-coloured robe he would gain influence over the other Istari? Perhaps it was only an experiment and he believed that the fact that Gandalf showed up at Isengard was proof that his experiment to gain power had worked, that he had indeed become a Ring-maker – and so he showed his true colours only to discover that, though it might have come to work in time, it hadn’t yet and so his downfall begun. He had failed to do what Evil Lords before him had done, he had been too eager in his lust for power or whatever else drove him and his deeds became known before his Ring was complete, thus not creating as much damage as it could have done. He did not gain dominion over the other Istari, instead, he was cast out of the Order, later to suffer the same fate as his predecessors – however, at a much smaller scale, because the Evil deeds of Saruman cannot be compared to those of Sauron and Morgoth. And yet, Saruman also marred Arda, but he had less influence because he spent less time there – the Shire was in a way as unspoiled by Men and by the troubles of the world outside as Arda was unspoiled before the marring done by Morgoth. Of course, it would be unfair to compare the two or in any way consider the two events equal, but some of the theory lying behind is similar.

Looking more closely at Saruman’s Ring, it could also tell us something about how Saruman came this far. How he was little by little corrupted, yet never realising it completely. His cloak appears to be white; it appears to be dazzlingly white and it is only when taking a close look that one sees the many-coloured threads. Could this be a symbol of how he initially had good intentions ? He wanted to create Order in Middle-earth, he wished to accomplish the goals that the Istari were sent out to do. But coming to Middle-earth and meeting the flawed residents of the land – Men, Dwarves and at times even Elves – and by the influence of the One Ring, he came to the realisation that they would never themselves gain the peace and make the order that was needed. They would always have their foolish squabbles and silly fights, and so, bit by bit, he realised that in order to make any changes, to do the good things he wished to do, sacrifices had to be made sometimes. Sacrifices for the greater good – surely, at a certain moment, he came to the point where he clearly saw that to realise his vision, people would have to lose their free will, but the goal was still pure; no matter how many black and blood red threads you use to achieve it, the goal will still be shimmeringly white. And so he was corrupted and created his Ring – the Ring that brought about his downfall. He became orderless and colourless – and meaningless. His evil would linger only for a bit longer, in the Shire which he has marred.

Third of the Ring-makers, perhaps the one to be the farthest from achieving his goals– but a Ring-maker is still a Ring-maker, and had he achieved his goal, it would have been as dreadful as any other. The many-coloured is not always a rainbow; not all that glitters is gold, and not all gold glitters.