~Samwise Gamgee~
"I know now, folk in those stories had lots of chances of turning back only they didn’t. They kept going, because they were holding onto something."

The heaviest burden – an account of the Doom of Mandos 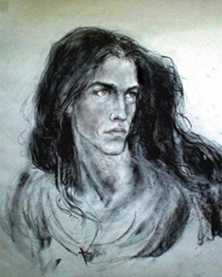 “Tears unnumbered ye shall shed; and the Valar will fence Valinor against you, and shut you out, so that not even the echo of your lamentation shall pass over the mountains. On the House of Fëanor the wrath of the Valar left from the West unto the uttermost East, and upon all who follow them it shall be laid also. Their Oath shall drive them, and yet betray them, and ever snatch away the very treasures that they have sworn to pursue. To evil end shall all things turn that they begin well; and by treason of kin unto kin, and the fear of treason, shall this come to pass. The Dispossessed shall they be for ever.

Ye have spilled the blood of your kindred unrighteously and have stained the land of Aman. For blood ye shall render blood, and beyond Aman ye shall dwell in Death’s shadow. For though Eru appointed to you to die not in Eä, and no sickness may assail you, yet slain ye may be, and slain ye shall be: by weapon and by torment and by grief; and your houseless spirits shall come then to Mandos. There long shall ye abide and yearn for your bodies, and find little pity though all whom ye have slain should entreat for you. And those that endure in Middle-earth and come not to Mandos shall grow weary of the world as with a great burden, and shall wane, and become as shadows of regret before the younger race that cometh after. The Valar have spoken.

Thus spoke Námo, or Mandos as he is mostly known, following the Kinslaying at Alqualondë of the Teleri elves. The doom of the words, which became widely known as ‘The Doom of Mandos’, ‘The Prophecy of the North’ or ‘The Doom of the Noldor’, befell all Noldor who chose to fly with Fëanor from Aman. They became the Exiles – forever denied re-admittance to the Blessed Realm. It is that curse which ever after marked the Noldor with a darkness and a shadow so obscure that it seemed impossible to lift.

Before they could even dream of being pardoned and be allowed to return to the lonely isle of Eressëa, the Exiles had to suffer both betrayal and treachery, mistrust and enmity, all in a fight for a cause they were doomed never to win on their own. Their great cities and treasures would be lost and the world as they knew it was fated to fade away, leaving them only with bitter memories of that which had been – and of that which they had given up the second they followed Fëanor.

The prophecy of Mandos did not need much time to start working. Already a short while afterwards, Fëanor proved Mandos’ words true as he commanded the white ships of the Teleri elves to be burnt, before all of the Noldorin host had been shipped to Middle-earth. Undoubtedly the doom would have been in work even if this had not happened, but it is certain that the more deeds of evil the Noldor did – either to each other or to others – the better a grip did the doom get on them.

At least it is certain that because of Fëanor’s betrayal of his kin, the remainder of the Noldorin host was forced to cross Helcaraxë, the Grinding Ice, to get to Middle-earth, as return to Valinor had been made impossible at this point already. The crossing of Helcaraxë did not help the relationship between the two Noldorin hosts, as the one under Fingolfin suffered many losses, and a dislike and mistrust of Fëanor and his house was kindled. 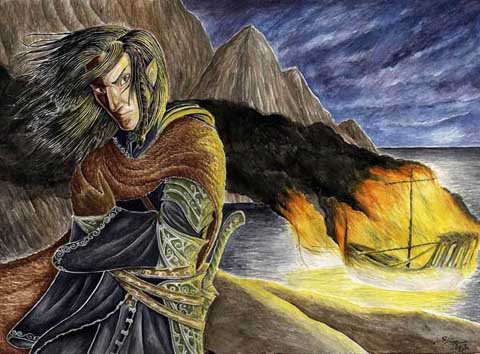 However this was only one consequence out of many; all the years that the Noldor spent in Middle-earth are marked by betrayal, the death and killing of kindred: Maeglin, when he reveals the location of Gondolin to Melkor; Celegorm and Curufin, who betray and backstab their cousin Finrod Felagund, when the latter asks for help for his own people, while trying to fulfil his promise to Beren. The great kingdoms of Nargothrond and Gondolin soon disappear, plundered by dragons, balrogs and orcs, and though their first kings may have died before that happened, many others remained still to face the day of these great cities’ fall. Even in latter days, after the curse is said to have been lifted, Galadriel is forced to face the fall of her own land, Lothlórien, which must have been the most beautiful of that Age, but also Eregion in the Second Age.

It is interesting indeed how Galadriel, living in the Third Age, when the Valar have long ago pardoned the rebellious Noldor, is forced as the last of the Exiles to face the true extent of Mandos’ doom. Having lived through the fall of all the great realms of Beleriand and the drowning of Beleriand itself, she also has to see her own race diminish and fade, giving place to the more dominant race of Man. She is weary of the world, as Mandos had foretold, and it has become a great burden seeing all she held dear pass away to the West or in other ways cease to exist. Whether this was ‘merely’ a later inescapable consequence of the Doom or whether some of the Noldor had in fact not been pardoned by the end of the First Age is difficult to tell, yet it is certain that there are other of Noldorin descent who suffer from the aftermath of the Curse even after it has been lifted, for instance, Celebrimbor, who had to see his most precious works being turned to evil, the beauty of his Rings being overshadowed by the immense evil they had the potential to do if placed in the wrong hands. Was not this a part of the curse of the Noldor? Or had the pardon extended so far that even a descendant of Fëanor’s house was redeemed?

Killings and betrayal and the fall of nations were not the only consequences of the Noldorin Doom. Death could be achieved just as well through grief and sorrow as by the sword, as we see with Finduilas whose death, however dreadfully she was tortured by orcs after the sack of Nargothrond, may also be seen as an effect of the Curse. Moreover, most of the people with whom the Noldor got in touch were contaminated with the shadow of the Curse, as it is seen in Doriath, where even Elu Thingol cannot hold back his wish to own a Silmaril.

In fact the curse’s effects were so influential on most other people, that to a degree Melkor did not even fear his enemies so much, after having seen the curse at work for a little while – which, of course, also became his downfall, as because of this he did not always attack as soon as would have been wise, thus giving his enemies a chance to hope beyond hope. 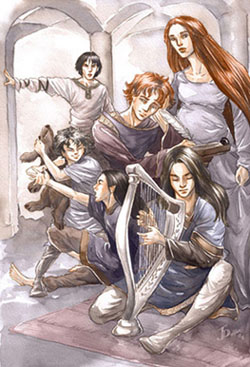 Even when victory had been achieved over Melkor, it was by the Vanyar and not the Noldor, who had spent centuries fighting for it. They would have to wait to be pardoned, until in disgrace they returned to the West, where the Teleri forgave them the past. And despite the greatness of the Noldor, the fact that the Vanyar accomplished what they had not must have been a shame to such proud people.

In spite of this it is uncertain whether there would have been much to save of Middle-earth had not the Exiles come. They did not accomplish much whilst there, for all they did came to an ill end, yet they did do some things. Their presence may have saved quite a few of the Avari and Sindar, and though they paid for this dearly with blood and deaths, it is likely that it could not have gone otherwise. It was the debt they had to pay in order to return: making amends to the Teleri by dying for their kin in Middle-earth.

Another interesting thing about the Curse of the Noldor is the earlier mentioned fact that with each killing and betrayal and ill deed done by the Noldor upon each other, the Curse increased in effect. Is it how the Curse actually worked? If a curse had been put upon the people, it must mean that things could have gone otherwise, what was it then in the nature of the Noldor that was ‘altered’? It seems inevitable that the realms of the Noldor would have fallen even had the Curse not been there. So one could guess that it was the shame which always followed the Noldor as a shadow that was the real curse. Not so much the effect of the Curse, but why the Curse had been uttered.

Either way it seems evident that in many ways one of the things which seems to be missing in some of the Noldor, particularly those who did ill deeds because of ill will, was empathy. They felt no pity with their enemies or with anyone, never showed any mercy.