~Oliphaunt~
"Big as a house, much bigger than a house, it looked to him, a grey-clad moving hill." 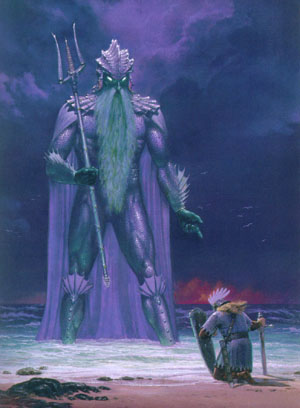 Name: Ulmo (means “The Pourer” or “The Rainer”). Can also be known as Neorth or Linqil.

Titles: King of the Sea, Lord of Waters, Dweller in (of) the Deep

Appearance: Does not appear in bodily form often, but when he does, his helm is dark and crested with foam, his hair is long and glimmers like sea-foam, and he is dressed in silver, fish-like chain mail with a green sash.

Home: Never stays long in one place, and hardly ever appears on land. Lives in the deeps of the Outer Ocean.

-Pardoned Ossë for being tempted into the service of Melkor for a short time.

-Dragging the island from Balar to Valinor with the Vanyar and Noldor upon it.

-Persuaded some of the Teleri to remain behind when he came to take them to Valinor. They were the Falathrim, and Cirdan the Shipwright was their lord.

-Was not decieved when Melkor ‘repented’.

-Told Turgon to go forth alone into the Vale of Sirion, where he found the hidden vale where he would build Gondolin.

-Helped to keep Gondolin hidden, with his power in the Vale of Sirion.

-Warned Círdan that peril was coming to Nargothrond.

-Appeared to Tuor and told him to seek out the hidden kingdom of Gondolin, and gave him a cloak that would hide him from his enemies.

-Asked the other Valar to forgive the Elves, and rescue them from Morgoth’s power.

-Saved Elwing from drowning, and gave her the shape of a big white bird.