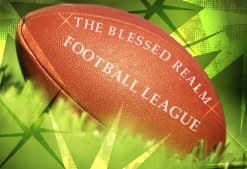 Manwë stumbles around in a dark room.

Manwë: Hello? Námo? Where- ow! Who put that table there? And why is it so dim in here?

Manwë jumps about three feet in the air.

Manwë: Aaaah! Don’t sneak up on me like that!

Námo: Why does Manwë come to the halls of Mandos?

Manwë: Do you really have to refer to me in the third person?

Námo: (shrugs) I thought it added to the creepiness.

Manwë: Look, our sports director has cooked up another half-baked plan. I need you to review it.

Námo: Ah, yes, football, the noblest of sports. Nothing like kicking around a ball to ease the boredom of housing dead people. Why, I remember-

Manwë: (interrupting) Not that football. The other football.

Námo: What, that monstrous perversion of sport they play Across the Water? With the ball that’s not even round?

Manwë: Yeah, that’s the one. I guess Tulkas grew rather fond of it when he was camping out in the Old Forest.

Námo: I always said he was insane.

Manwë: Look, I just need you to see whether it might work.

Námo: (pretends to think) Nope, it’s not in the Song.

Manwë: Oh, come on. If nothing else, it might give all those souls you’re guarding something to read about while they’re waiting for the world to be remade.

Námo: (sulkily) Oh, fine. It’s not like I have anything else to do anyway.

Námo goes to a closet and pulls out a crystal ball. He puts it on the table.

Námo: Please, seat yourself, O Great One, while I consult the crystal ball in this matter.

Manwë: Do we really have to go through all this mumbo-jumbo?

Námo: Shh, you will disrupt my concentration.

Námo waves his hands over the crystal ball. A cloud rises from it, and he peers at the ball intently.

Manwë: That’s because that crystal ball is covered in dust.

Námo: Oh! So it is. I guess it’s been a long time since you last consulted me.

Manwë hands Námo a handkerchief. Námo wipes off the crystal ball, wipes his nose, and then hands the handkerchief back to Manwë.

Námo: Oh great Ball, imbued with great wisdom from the One, keeper of the secrets of the Song, whose great melody guides us in our work…

Manwë: Námo, it’s a glass ball. You’re the one with all the mystical knowledge.

The crystal ball blows a raspberry at Manwë.

Námo: (to Manwë) Do you want to hear about the football or not? We beseech thee, bless us with the knowledge of the future of Tulkas’ ridiculous football league, which I have no doubt is doomed to failure, and since I’m the doomsman of the Valar, I must be right…

Manwë: It’s a good thing we can count on the ball to give us an unbiased opinion.

The crystal ball begins to flicker.

The picture clears up, and we see the Valar sitting around a table.

Tulkas: Okay, folks, it’s time to pick team names. We’ll go around the table and see what everyone has decided to call themselves. Manwë, you want to start?

Manwë: The team from my realm will be called the Manwë Eagles.

Ulmo: (aside to Aulë) How original. (snickers)

Manwë: (glaring at the two of them) And what brilliant name did you come up with, O Lord of the Seas?

Manwë: You can’t take team names from a mythology that doesn’t exist yet!

Manwë: That’s completely against the rules! Besides which, it makes no sense!

Estë: Actually, Tulkas, my realm has decided not to form a team. If the rest of you are going to run around tackling each other and knocking each other unconscious, we’ll be kept busy enough trying to heal the rest of you. Let’s hope the pads and helmets Vairë is making will help protect you. I can’t for the life of me understand why you want to go chasing after some ball that’s not even round; that’s probably the stupidest-

Tulkas: (interrupting) Yes, thanks Estë and Vairë for your help. Okay, so Aulë, what did you pick?

Groans from around the table.

Irmo: That’s what we picked!

Oromë: That’s what we picked, too!

Aulë: Look, I’m sorry guys, but he asked me first. That’s just the way it goes.

Oromë: No way. We got it printed on our jerseys already and everything.

Aulë: Well, that was a little premature.

Oromë and Irmo both start arguing at once. Aulë tries to shout over them. Nienna bursts into tears.

Nienna: (sobbing) Please, don’t fight! I hate it when you fight like this!

Námo: (to Manwë) I told you this wasn’t going to work!

Nessa: (to Tulkas) You idiot! I told you not to do this!

The assembly dissolves into squabbling. Suddenly the picture in the ball turns into snow.

Námo: Hmm, the cable seems to be out.

Námo dives under the table.

Námo: (muffled) Is it red on right or white on right? Or do I want the S-video cable?

Manwë: Do you need some help down there?

The crystal ball flickers to life.

Alex Trebek: Answer: Although he was best known for his fiction writing, this 20th century professor’s first love was linguistics.

He adjusts a knob and the picture changes to a football game.

Commentator: It’s 3rd and 17 for the Manwë Eagles, and things just have not been going their way today. The Neptunes have been walking all over them. And here’s the pass- it’s been tipped! But what’s this? A rather large bird seems to have snatched the ball in midair! He’s carrying it downfield! He’s over the end zone now! He’s dropping it- it’s caught! Touchdown Eagles! (cheers from the crowd)

Manwë: I wouldn’t do that!

Commentator: And here’s the kickoff. It’s caught at the 20 yard line and- where’s all that water coming from? It’s rising quickly- and look, dolphins! A dolphin appears to have put the receiver on his back and is swimming downfield- Manwë’s defense is swimming after, but they’re not nearly as fast, not with all that soggy padding- and the dolphin and receiver have made it to the end zone! Touchdown Neptunes!

Manwë: What?!? That cheater! What is that ref, blind? Why I oughta go down there and-

Námo: And the eagle was perfectly legal I suppose.

Manwë: Look, maybe I should just tell Tulkas to call this off. I’d certainly hate to see Ulmo disgrace himself like that. Besides, I hear they’re making a movie about that war in Middle-earth. Maybe we could just have endless debates about that. I hear the filmmaker’s interpretation of Balrogs gives a whole new perspective on the wings debate.

Námo: I hear the guy who plays the dim-witted elf is pretty good-looking.

Manwë: I did not just hear you say that.

Námo: Hey, I’m the one stuck talking to dead people. We have to talk about something.