~Eomer~
"Then one rode forward, a tall man, taller than all the rest; from his helm as a crest a white horsetail flowed." 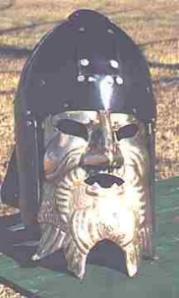 Dwarves, though short, are big-boned and battle ready, but they were the greatest weaponry and armory forgers in Middle-Earth. These short and stout little men, according to the Silmarillion, were the first beings in Middle-Earth to create the idea of chain mail. Tolkien refers to this occasionally as “fish’s-mail” because of its appearance of fish scales.

The Dwarves’ weapon of choice consisted obviously of an axe. They would also carry a shield into battle, and occasionally they would also have a spear or a short sword, such as Sting. Their swords would carry Dwarvish rhunes, that normally told of their house, (identify whose sword it was). A Dwarf’s sword did not use polished metal, but was of a black rough metal.

A typical Dwarven outfit would consist of an axe, chain mail, a helment, and a shield. One of the interesting things about this outfit would be the helm or helment. In J.R.R. Tolkien’s Unfinished Tales, he mentions Dwaves with bore terrible masks on their helms. These were supposed to be most helpful in fighting dragons. 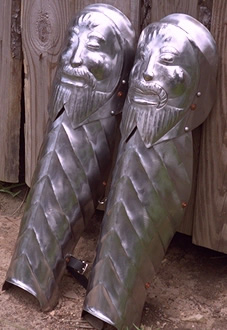 Dwarven armory was said to be “new-burnished” meaning that it was never rusted, but shined brightly like new. This is significant in the fact that all of the Dwarves’ outfit shined like new, their weapons, helms, and greaves. Greaves protected a Dwarf’s shins and knees. These particular greaves in the picture, held a Dwarf’s face with a sharp, “forked” beard. It is said that this is the characteristic of Durin’s household.

Source(s)- www.lordotrings.com (Information from an essay by Joe Piela; an elaboration on his article)