~Arwen~
"Young she was and yet not so. The braids of her dark hair were touched by no frost; her white arms and clear face were flawless and smooth."

Herugrim was the name of Théoden’s sword, and it was a noble weapon. Many kings before Théoden had wielded this blade in battle, and many enemies had it slain, including Orcs, Dunlendings, Uruk-hai, and Wargs. 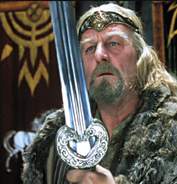 In appearance it was similar to a standard Rohan sword, being single-handed and measuring about three feet in length. Its fuller blade was undecorated, but the guard and pommel were ornate. The guard was crafted in the likeness of two horses’ heads touching and was made of bronze, as was the large pommel.

Herugrim’s scabbard was wooden, covered in red leather and featured an ornate bronze design the complemented the ancient sword. Because Théoden was left handed, Herugrim was worn on the king’s right side.