Hobbits are a peaceful race, liking nothing more than eating, sleeping and pleasant company. However when pressed, a Halfling will fight with a courage not generally imaginable when considering their small size. This makes them make fearsome warriors, especially when defending their homes.

This is shown in varying degrees by the Red Book. 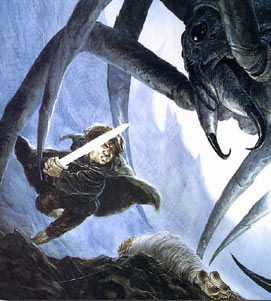 It is not normal for a Hobbit to carry weapons or armour. Indeed the wearing of “Ironmongery” is frowned upon by many Hobbits, “whether it wears well or not”. Notable exceptions to this rule would be Bilbo and Frodo Baggins, who both wore Mithril and carried Sting; Meriadoc Brandybuck, an esquire of Rohan; and Peregrin Took, a guard of the Citadel. These last two Hobbits wore the appropriate livery of their posts and took part in some of the greatest battles of the War of the Ring; notably the Siege of Gondor and the Battle of the Pelennor Fields. Indeed, Meriadoc played a major part in the downfall of the Witch King of Angmar. Pippin later killed one of the great Olog-hai at the Black Gate, so drawing level with ‘dear old Merry’.

These, though, are some of the only exceptions to the rule that Hobbits are peaceful; and for the most part the only weapons a Hobbit will carry are a walking stave and perhaps some stones for throwing.

Such is a Hobbit’s deadly accuracy with a stone, it is said that when seen stooping for such an item, birds and beasts will run for cover. I, however, believe this to be an exaggeration.

The Tooks and the Brandybucks are perhaps to be seen to be more ‘warlike’ Halflings; living beyond the actual Shire in outlying regions such as Buckland and the Great Smials.

Although not known to actively seek war with other races, the Tooks and Brandybucks are known for their archers. Because of their short stature, the largest bow an average hobbit could comfortable draw would only be 3-4 feet in length, compared to the deadly Elven longbow which is on average 6 feet tall. However, even this short bow, coupled with the Hobbits’ natural aim, would prove deadly at close range.

While considering Tooks, it may also be prudent to mention ‘Bullroarer’ Took, a Hobbit of massive stature, whom, it was said, could even ride a horse. He wielded a great club and personally slew Golfimbul the Goblin and invented golf at the same time. However it should be noted that he returned to peaceful life after this encounter.

Hobbits in the service of the King

It is known that long ago, in the early days of the Shire, a great war took place in the North between the Kings of the West and the Witch King of Angmar. In one of these battles, a contingent of Hobbit archers were said to have taken part.

The only other Hobbit in direct service of the King was Peregrin Took, who, as has already mentioned, was a guard of the Citadel.

During one particularly cold winter in the Shire, the Brandywine froze, allowing white Wargs to cross and terrorize the Shire. Though little is known of this time, it can be assumed that the Shire folk triumphed over the wolves.

After this round of battle, the office of Shiriff was founded, the Horn Call of Buckland created, and Bounders were put in place to act as police or wardens.

This seems to be the only active role the Halflings have taken to protect their realm, and probably the only reason that significant harm did not befall them is that they were under the constant vigilance of the Rangers of the North.

The Scouring of the Shire 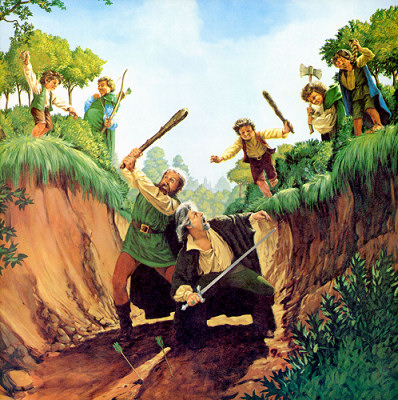 In the early years of King Elessar’s reign, the Shire was in the grip of a band of ruffians led by Sharkey and Worm (Saruman and Grima).

The main battle during this time occurred when a group of ruffians was tricked into being trapped between two barricades, flanked by hedges on the road to Bag End. This situation was created due to Merry’s cunning, who had a great tactical mind (for a hobbit). In the ensuing fight, many ruffians, and a few hobbits, were slain.

The Hobbit folk fought well, but the tide was turned by the arrival of a party of Brandybucks and Tooks led by Peregrin Took. Again, this Hobbit’s military knowledge and leadership would have surpassed that of the ruffians; and so cunning and bravery saved the day.

A wise commander would not underestimate the Halflings of the Shire. Although their small stature demanded that they fought with swords that we would think of as little more than knives, they were brave and hearty folk who would sacrifice all in defence of the land they loved.