Making of the Movie Swords

Peter Lyon, who was a part of the Weta Workshop, was chosen by the head of the prop’s department to work on the weaponry in the Lord of the Rings movies. John Howe also worked on the weapons, though he gave Lyon Tolkien’s descriptions of the different weapons.

Many of the swords were actually real swords or ‘hero’ swords, and these were used for up-close shots. These swords also had blunt edges, never sharp, so that the actors could carry their swords with them all day on set. Other swords were usually made of aluminum, and were called stunt swords. These were swords that wouldn’t hurt fellow opponents. Peter Lyon said that in the end of the Lord of the Rings movies, he had made 100 ‘hero’ swords and 300-400 stunt swords. 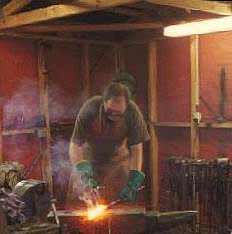 In the Lord of the Rings Trilogy, most swords were made to look old, yet well-used and well-polished.When starting the process of making a sword for the movie, such as Narsil or Sting, the makers forged a brand new blade and hilt. The blade was made of ‘spring’ steel, and then heat-tempered to give it hard edges (un-wobbly).

Next, to make the metal look corroded and old, they used various chemicals and an acid. They cleaned the blade off after a few days and the blade now looked ancient and battle-worn.The makers added a hilt to the blade and it was ready to use.

All of the various swords were used throughout the three movies. Many of the stunt swords were kept in New Line’s possession, and will remain there for a long time. The ‘hero’ swords, however have gone many different ways. Usually, the ‘hero’ swords ended up in museums, with an actor’s entire outfit.