When the the success of Beren and Lúthien’s Quest became known throughout Beleriand, Maedhros began to realise that Morgoth was not unassailable, but he also knew that if the elves did not unite and act, the Dark Lord would destroy them all, one by one. So he began a series of counsels known as the Union of Maedhros, though the fell effects of the Oath of Fëanor worked against him, and less aid came than he would want.

Those who came were:

– Fingon and his men.
– The other sons of Fëanor and their people.
– Elves from the Falas.
– Gwindor son of Guilin and his company from Nargothrond. They marched under the flag of Fingon against the will of Orodreth.
– Mablung and Beleg from Doriath, again marching under the flag of Fingon. Thingol had given them leave to go, as long as they did not fight alongside the sons of Fëanor.
– The Naugrim – important in armed force and in weaponry.
– Men of Bór and Ulfang, and their kinsfolk from the East.
– Men of Haleth, led by Haldir.
– Turgon and 10000 men from Gondolin.

Those who would not come were:

– Orodreth and the majority of the elves of Nargothrond – because of the deeds of Celegorm and Curufin.
– The Elves of Doriath, except Mablung and Beleg.

However, Maedhros tried out his army too soon, before his plans were fully formed, and Morgoth received warning of the uprising. He then sent many spies and workers of treason among the Union, for he had many faithless Men of his secret allegiance deep in the employ of the sons of Fëanor.

Maedhros resolved to assault Angband both from the east and the west. He and his forces would march with banners fully displayed over Anfauglith to draw forth the armies of Morgoth. Then Fingon would come forth from the passes of Hithlum, and catch the dark forces as between a hammer and anvil. The signal for this was to be the firing of a beacon in Dorthonion on Midsummer’s Day.

What actually happened in the battle

Fingon was based in Eithel Sirion, with his troops arrayed in the valleys and the woods in the eastern Ered Wethrin. His host consisted of the Noldor of Hithlum, the Elves of the Falas, Gwindor’s company, Men from Dor-lómin and the companies of Húrin, Huor and Haldir. His host was boosted just before the battle by his brother Turgon, who marched to war with 10000 of his Gondolindrim.

“The when Fingon heard afar the great trumpet of Turgon his brother, the shadow passed and his heart was uplifted, and he shouted aloud: “Utúlie’n aurë! Aiya Eldalië ar Atanatári, utúlie’n aurë! The day has come! Behold, people of the Eldar and Fathers of Men, the day has come!” And all those who heard his great voice echo in the hills answered crying: “Auta i lómë! The night is passing!”” (Silmarillion, Of the Fifth Battle: Nirnaeth Arnoediad) 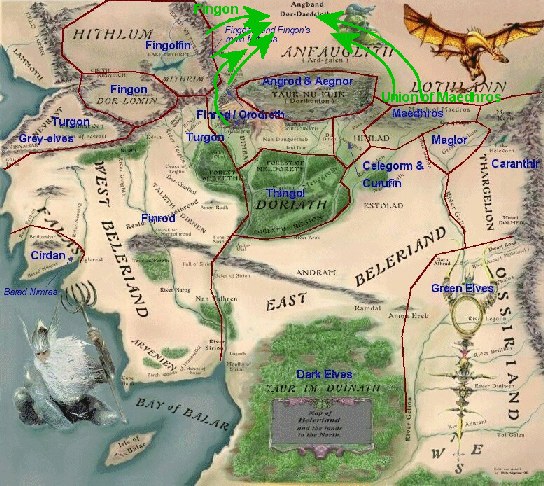 Morgoth then chose his hour – trusting that his servants were holding back Maedhros and his forces – sent a great force towards Hithlum, wearing dun raiment and showing no naked steel. Thus they were far over Anfauglith before their approach was seen.

It was only through the words and wisdom of Húrin that the hot-headed Noldor were kept back from an immediate attack. But the Captain of Morgoth in the west had been ordered to draw Fingon out as soon as possible, and he marched his troops right up to the Sirion, next to Eithel Sirion. Still Fingon refused to come out. So then the Captain sent out riders with tokens of parley, and they took with them Gelmir son of Guilin, a lord of Nargothrond that had been captured in the Dagor Bragollach. In front of the elves, they chopped off his hands and feet, and finally his head.

In the outworks was Gwindor of Nargothrond, brother of Gelmir. When he saw the orcs’ treatment of his brother, he was kindled to madness, and he pursued the heralds with his men. He slew many of them, then carried on fighting through Morgoth’s troops.

“And seeing this all the host of the Noldor was set on fire, and Fingon put on his white helm and sounded his trumpets, and all the hosts of Hithlum leapt forth from the hills in sudden onslaught. The light of the drawing of the swords of the Noldor was like a fire in a field of reeds; and so fell and swift was their onset that almost the designs of Morgoth went astray.” (Silmarillion, Of the Fifth Battle: Nirnaeth Arnoediad)

Fingon and his army then sliced through the host of Morgoth, and his banners were soon raised in front of Angband. Gwindor and his men carried on into Angband itself, and there all were slain, save Gwindor himself, who was taken captive.

Morgoth then let forth his main host, and Fingon was beaten back with great loss. And thus began the “Nirnaeth Arnoediad, Unnumbered Tears, for no song or tale can contain all its grief”. Fingon retreated over Anfauglith, and during that withdrawal, Haldir lord of the Haladin and most of the Men of Brethil were slain.

On the fifth day of war, the Orcs surrounded the host of Hithlum, and they battled all day. On the sixth day, Turgon and his Gondolindrim left the guard position at the Pass of Sirion and came to Fingon’s aid.

“the Gondolindrim were strong and clad in mail, and their ranks shone like a river of steel in the sun.” (Silmarillion, Of the Fifth Battle: Nirnaeth Arnoediad)

At the third hour of the morning, Turgon fought his way through to his brother. Then the trumpets of Maedhros were heard coming from the east, and his host assailed the rear of Morgoth’s army. Just as the Orc army was wavering, Morgoth released his last strength, and Angband was emptied. From the fortress came wolves, wolfriders, Balrogs, and dragons – including Glaurung. The Father of Dragons terrified all who saw him, and he came between the hosts of Maedhros and Fingon, sweeping them apart.

The treachery of Men

It was possible that the Elves would have triumphed if it wasn’t for the treachery of Men. Many of Maedhros’ Easterling forces turned and fled, but the sons of Ulfang suddenly went over to Morgoth and started attacking the rear of the Sons of Fëanor’s hosts.

There, Maglor killed Uldor the accursed, the leader of the treason, and the sons of Bór killed Ulfast and Ulwarth. But Ulfang had previously hidden another force of Men in the eastern hills, and then they came to battle. They enclosed the army of Maedhros on three sides, forcing it to break and flee.

Only a remnant of the eastern army of the Noldor survived and regathered, and they hewed a way out of the battle, escaping towards Mount Dolmed.

“And Uldor went over to Morgoth with most of the men of Ulfang, and they fell upon the right flank of the Sons of Fëanor.

Cranthir slew Uldor, but Ulfast and Ulwar slew Bor and his three sons, and many faithful men; and the host of Maidros was scattered to the winds, and the remnant fled far into hiding into East Beleriand and the South, and wandered there in sorrow.” (The Lost Road and Other Writings, Later Annals of Beleriand)

Last of all the eastern forces to remain standing were the Dwarves of Belegost. They encircled Glaurung, hacking at him with their axes, and eventually Azaghâl drove a knife into his belly. The dragon then crawled away from the field, and many of the beasts of Angband followed him.

The ending of the battle

The western end of the battle was also going badly, as Fingon and Turgon were surrounded by a force three times as big as their remaining men. Gothmog, Lord of Balrogs, issued forth from Angband and proceeded to drive a wedge between the forces of Fingon and Turgon, and then his forces surrounded Fingon, turning Turgon and Húrin aside towards the Fen of Serech.

“At last Fingon stood alone with his guard dead about him; and he fought with Gothmog, until another Balrog came behind and cast a thong of fire about him. Then Gothmog hewed the helm of Fingon as it was cloven. Thus fell the High King of the Noldor; and they beat him into the dust with their maces, and his banner, blue and silver, they trod into the mire of his blood.” (Silmarillion, Of the Fifth Battle: Nirnaeth Arnoediad)

Fingon’s death encapsulated the Doom of the Noldor. The most noble of Noldor elf-kind, full of great hopes and ideals, ending trodden into the dust. Here there is a comparison drawn between the glorious entrance of Fingolfin into Middle-earth (“Fingolfin unfurled his blue and silver banners, and blew his horns, and flowers sprang beneath his marching feet”) and the degrading death of Fingon (“and his banner, blue and silver, they trod into the mire of his blood”) trampled beneath his enemies’ feet.

Húrin, Huor and the remnant of the House of Haldor stood firm with Turgon, and Morgoth could not take the Pass of Sirion. Then Húrin told Turgon that he should retreat back to Gondolin as the field was lost, and Gondolin would be needed as a base for elvenkind and a symbol for the hope of the Eldar. Turgon took his advice, gathered his Gondolindrim, and retreated towards the Pass. Glorfindel and Ecthelion guarded his flanks, and the Men of Dor-lómin formed a rearguard. Thus the treachery of Ulfang was redressed, and of all the deeds that Men wrought on behalf of the Eldar, the last stand of the Men of Dor-lómin was the most renowned.

Turgon and his men fought their way southward, eventually escaping back to Gondolin behind the guard of Húrin and Huor. The brothers then drew the remnants of the House of Hador around them, and they slowly retreated until they reached the Fen of Serech. There they made their final stand.

The hordes of Morgoth swarmed against them, bridging the stream with dead bodies, and encircling the remnant of the Eldar. As the sun set on the sixth day, Huor fell, and the Men of Hador lay dead around him. Finally, Húrin stood alone. He slew many of his Morgoth’s forces before Gothmog bound him and dragged him off to Angband.