~An Unexpected Party~
"Gandalf sat at the head of the party with the thirteen dwarves all round: and Bilbo sat on a stool at the fireside..." 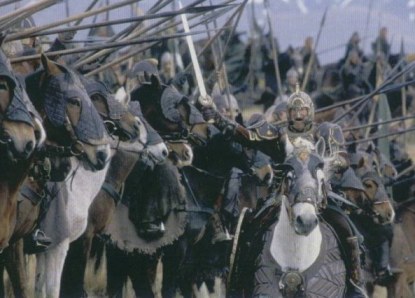 The Rohirrim’s culture was based on horses and riders, so their weapons included bows, swords, spears, and axes (though the type of weapons may have differed among riders).

A simple short bow, that could shoot only 125 yards, was crude compared to the Gondorian or Elvish bow, but out-ranged orc bows. The flight was made of leather, unlike all the other arrows of Middle-earth, and the tip was a strong steel. The Men of Rohan were more interested in a powerful, short blow than an arrow that flew a great distance and only weakened the enemy. They wanted to kill in one shot. This made sense, since on horseback they could ride into range, fire, and then ride back out before the enemy could shoot.

The spear of the Rohirrim was for charging into battle and destroying pike walls. It was a simple stab and then the riders could draw their swords or pull out their spear from the newly departed and stab again. Once again, the weapon was simply designed to have a powerful blow, and was not thrown at the enemy. Charges of the Rohirrim in full armor,
screaming war cries, and charging full speed on their horse
with a spear could scare the bravest.

The beautifully carved Rohan swords were designed for downward slashes, probably from horseback, not for stabbing. About a thirty inch long blade, it was not meant for stabbing because of the rounded point at the tip of the blade.

The Rohirrim also carried a axe into battle, which could be used on foot or on horse back. About three feet long, it could be thrown also to kill an enemy with its sharp blade of bronze.

The Rohirrim were also equipped with a circular shield (with horse symbolism) and a layer of thin armor (perfect for horseback riding). Altogether these made the Rohirrim a very strong and diverse group of warriors.

Lord of the Rings Weapons and Warfare (Chris Smith)