Index
Home » Weapons » Battles » The War of the Last Alliance

The War of the Last Alliance

“All living things were divided in that day, some of every kind, even of beasts and birds, were found in either host, save the Elves only”
(The Silmarillion, Of the Rings of Power and the Third Age

At the Downfall of Númenor in Second Age 3319, Elendil and his sons escaped the cataclysm and sailed to the Grey Havens. There they dwelt for many years building friendships and alliances with Círdan the Shipwright and Gil-Galad, High King of the Elves. After many years Elendil left and established the Kingdom of Arnor, and his sons, Isildur and Anarion went on to establish the Kingdom of Gondor which they ruled peacefully together.

However, Gondor was close to Mordor, and Sauron assailed the country many times, but it was not until SA 3429 that he launched what would become one of the greatest wars in the history of Middle-earth. 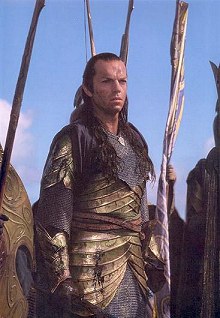 The war began with the assault of Sauron’s forces on Minas Ithil, governed by Isildur, son of Elendil. Isildur surrendered Minas Ithil and Ithilien then fled with his family to Annúminas where his father was governor. Sauron’s forces then moved to Osgiliath, but Anarion, brother of Isildur, was successful in defending the city, as well as driving Sauron’s forces out of Ithilien.

In SA 3430 an alliance was made in Annúminas between Elendil and Gil-galad. The alliance, which included the realms of Gondor, Arnor, Lindon, and Imladris, sought to march to Mordor, and achieve complete victory over the Dark Lord, bringing peace to Middle-earth. This task would prove to be a challenging task as Sauron’s forces included a great number of orcs, trolls, men, and his chief servants, the Nazgûl. Over the next year, the two kings gathered their forces and readied for war. When both were ready, they marched east from Amon-Sûl to Imladris.

In SA 3431, when both armies had reached Imladris, preparations for war continued for three more years. In SA 3434, the company set out for Mordor. They crossed the Misty Mountains to the vales of Anduin, and as they marched toward Mordor, a great army of elves from Lothlórien and Mirkwood joined them led by Oropher, Lord of the Silvan elves in Mirkwood. Dwarves from Moria as well as men from Rhovanion came to join the ever-growing host. From the South through Ithilien the army of Gondor came, creating an army in number second only to the great army that fought in the War of Wrath.

The first major battle of the War of the Last Alliance took place in 3434 on the stony plain of Dagorlad. The battle would prove to be long and difficult for the Alliance. Although in the end they did prevail, Oropher, King of Mirkwood was slain. He was headstrong and unwilling to be placed under the great command of Gil-Galad. He had assembled a great army, which he led valiantly, and it was ill equipped compared to the host of the Elves of the West. Oropher rushed forward at the head of his greatest warriors before a signal for advance was given, therefore cutting himself off from the main host. This forced him to be driven in to the Marshes of Dagorlad, later known as the Dead Marshes. There he and those who followed were slain. Fortunately, the primary force, which included his son Thranduil, was left behind. The dead were later put to rest in the Dead Marshes.

“Then Gil-Galad and Elendil passed into Mordor and encompassed the stronghold of Sauron; and they lay siege to it for seven years, and suffered grievous loss by fire and many darts and bolts of the Enemy, and Sauron sent many sorties against them.” (The Silmarillion, Of the Rings of Power and the Third Age)

Later that year the Siege of Barad-Dûr began and lasted for nearly seven years. During this time many minor battles were fought, brining the Alliance closer and closer to victory. In SA 3440 Anarion, son of Elendil was slain in battle. Despite the loss, the Alliance continued to fight valiantly. Finally, in SA 3441 Sauron’s forces were so diminished that he himself had to meet his enemy face to face. This final battle would prove to be one of the greatest and most legendary battles in the history of Middle-earth. 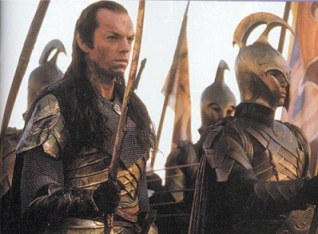 At this final battle the leaders were Elendil, with Isildur at his side, and Gil-Galad accompanied by Elrond and Círdan. In that last battle, Sauron appeared wearing the One Ring and caused great loss on the side of the Alliance. These losses include the last great king of the Elves, Gil-Galad and Elendil. Narsil, the great sword of Elendil was shattered at his death.

At that time, all hope of ultimate victory over the Dark Lord faded. But Isildur picked up the shards of his father’s sword and struck Sauron slicing off the finger wielding the One Ring. Sauron was defeated, and his spirit fled into the shadows, leaving the Alliance victorious.

When the remaining of Sauron’s forces had fled, Elrond, herald of Gil-Galad, led Isildur to the heart of Orodruin, the one place that the One Ring could be destroyed forever. When the time came for him to cast it into the fire, he refused. Isildur kept the Ring, using it to gain much power, but eventually the Ring betrayed him. At the Disaster of the Gladden Fields, he was killed, along with his three eldest sons, by a band of orcs. The Ring fell into the Anduin where it was lost for over two thousand years.