The Weaponry and Armour of Aragorn and Strider [film version] 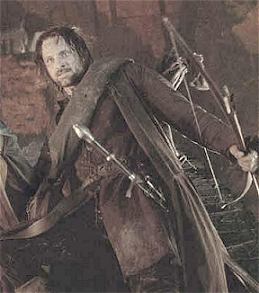 When the hobbits first encounter Strider he carried with him an array of weapons. He carried the sword of a warrior rather than that of a Ranger of the North; and this reached close to five feet in length. The blade was narrow and reached four feet from the steel cross guard to the very tip.

The sword was designed to give the wielder a greater combination of strength, reach and quickness. This was well suited to the style that Aragorn used in battle; greatly influenced by his Elven upbringing.

He would use the power of his opponent’s own blow, and return it upon them by mmeting their blow in the height of their swing, and redirecting it upon them using the length of his blade to full advantage. More often then not this blow would knock the foe off-balance giving Aragorn an opening to strike again. This counter attack would have normally been two handed. The length of the blade also gave Aragorn further reaching distance. When Aragorn used this advantage he would generally have used a one handed attack.

In the center of the handgrip was a ring of steel giving the wielder the option of using either one or two hands. The blade was also balanced by a large bottle shaped pommel.

The sword was kept in a plain scabbard that was wrapped in such a manner that another, smaller, scabbard could be attached to hold a utility knife. The knife was used for everyday tasks, such as preparing kindling for fires, the skinning of animals and repairs. 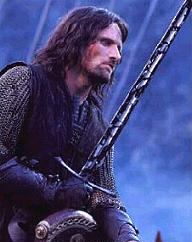 When it came time for Aragorn to take to the Paths of the Dead and summon the Oathbreakers to fight, only the sword of the King of Gondor would bend them to this bidding. It was at the pleading of Arwen that the sword of Kings was reforged. It was once the sword of Elendil, Narsil, but became nothing more then shards when it was shattered by Sauron. The shards of Narsil were reforged to by Elven smiths in Rivendell and were made into Andúril, Flame of the West.

It was the Lord Elrond who presented the sword reforged to Aragorn at Dunharrow and thus making him accept, at last, that he was to take the throne of Gondor. Andúril was almost identical to Narsil in every way save that down the center length of the blade ruins were detailed. The inscription was in Quenya and made in the runic symbols of Eregion and they appeared on both sides. The details were of the Sun, which was detailed in enamel of amber near the hilt and the Moon was engraved at the edge of the fuller.

The Sun and Moon was joined by the symbolic Seven Stars, representing Elendil who had fallen in the battle against Sauron. The Sun and Moon appeared to respectfully represent his sons. The Quenya inscription upon the blade reforged reads as followed:

Sun
I am Anduril who was Narsil the sword of Elendil. Let the thralls of Mordor flee me.
Moon

This inscription appeared also on the belt that carried Andúril and in part upon the brass and steel plate that was fixed on the plain black scabbard.

The bow that Aragorn carried with him was a small one made of dark-stained wood. It was three feet long, and was used more as a hunting tool rather then a weapon. It was made in the fashion of a Gondorian bow, save that it was smaller.

The bowstring was held under high tension to give a better shot when fired. This would have meant that Aragorn would have to have carried the bow unstrung to save its effectiveness. The arrows that were made to accompany the bow were only reached 20 inches, to ensure that the bow could have been fully drawn. The range of an arrow when shot from this bow was 75 feet. This was a modest shot that would have proved worthy when hunting game. 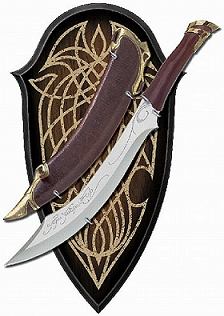 When the Fellowship made ready to depart from Lothlórien, Celeborn gave Aragorn a gift – an Elven hunting knife that would prove worthy throughout the War of the Ring. The knife was made as were many other Elven blades; it was made in the likeness of the growth of a new shoot with the handgrip made of a hardwood that was most likely to have been oak. The pommel was made of brass and its beautiful curved blade was inscribed with Sindarin writing:

As Aragorn was right handed he kept his sword to his left, and his hunting knife at his back. If both of these weapons were drawn, the hunting knife was most likely to have been used in the fashion of a small sword, to stab and slash. If Aragorn was to bring these two weapons together, he could have used them to defend himself well bringing them together in the manner of a “X”. This would have blocked or trapped enemy weapons, and would have brought the enemy into close range giving Aragorn the chance to withdraw his knife from the defense and attack.

This hunting knife was kept in a scabbard that was made of leather and fitted with bras. It was kept hidden and out of the way at the back of the sword belt.

Rangers did not tend to favour metal armour as the weight of it would have been a burden rather then a help. This was no different for Aragorn, and was also this reason he did not wear a helmet. However, at the battle of Helms Deep, where hand-to-hand fighting was the major form of attack, he did wear a mail shirt.

Instead, Aragorn was clad in a fine linen shirt with delicate embroidery; likely to have been made in Rivendell. He also wore dark woollen hose and tall soft boots that were made of travel-worn leather. Over his shirt Aragorn wore a sleeveless jerkin, made secure by braided cord ties. A coat of thicker and stronger leather went over this. Its sleeves were stitched along the underside of their lengths and also at the shoulders. This would have made it possible for the sleeves to be removed if needed. Aragorn carried with him a cloak and when it was not needed to it was rolled up and carried upon his back.

It was not until the Battle of the Pelennor Fields was won, and the Host of Men marched upon the Black Gate, that Aragorn chose to clad himself in the attire of the King. The black hose was kept but the linen shirt and boots were changed. The shirt was replaced with a red linen shirt detailed with corded leather braid. The travel-worn boots were replaced by black boots that were heavier in make. They were fitted with steel plates that sat over the bridge of the foot and were engraved in the fashion of sea birds’ wings. Steel greaves were also attached to the boots. 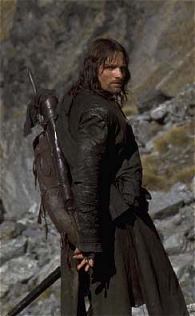 Aragorn then had a full shirt and skirt of mail. The shirt was tightened by leather points that were laced through leather hems at the back, and by a buckle that was fasted at the back of the neck.

Pauldrons made of steel and boiled leather were fastened to this mail shirt. They were edged in gold and were engraved with Gondorian motifs and feathers. He had rerebraces that were patterned with the winged crown and the seven stars, and he also wore Boromir’s vambraces.

Over all of this Aragorn wore a sleeveless robe of red velvet, edged in gold. The three buttons of silver were engraved with a star. Another robe was added, black, made of leather and again edged with gold. It was fastened with claps made of silver. This robe held the device of Gondor, the White Tree surrounded by seven stars, detailed in silver.

A finely made cloak of black was made to complete the outfit; and this was fastened to the outer robe by clasps of gold and silver.

Though it was not in the manner of a Ranger to carry a shield, one was made ready for Aragorn none the less. The shield was made to complete his Kingly attire and was of closer shape to that of the ancient shields of Númenor. The wood was covered with black leather, embossed with bronze and finished with the Tree of Gondor, the Seven Stars and the Winged Crown of the King of Gondor.