The Weaponry of Legolas [film version] 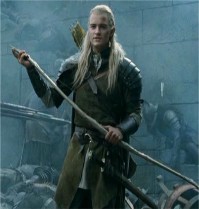 Legolas was considered to have unmatched skills with a bow and as he reacted with lightning speed and lethal accuracy, this was obviously a great benefit to the Fellowship.

Little is known about Legolas and it was thought that since he was a Prince of Mirkwood he could have led some form of defense. This would have helped to better his skills and claimed many orc lives.

When the Fellowship was forged Legolas carried with him a standard Mirkwood bow, or so it appeared. In appearance it was made of dark wood, carved in the style of Númenorean longbows and fashioned with a pattern of golden leaves. It was thought that Legolas made this bow himself in his youth and was made for firing from within tree canopies. When strung, this bow stood at 60 inches and could easily fire an arrow with great force across a 250-yard reach.

The arrows of Mirkwood were stained to match the coloring of the bow and were sturdy. They were 30 inches long and pointed with narrow tips that were designed to pierce both armour and flesh.

In Lórien, Legolas was given a bow blessed by the Lady Galadriel; it was carved from a single piece of mallorn heartwood. This bow was paler than his other, and was carved so it appeared to have leaves and vines climbing over it. When the Lorien bow was strung it measured 68 inches and could send an arrow 400 yards with great accuracy. The string of this bow was rumored to contain a single strand of the Lady Galadriel’s hair.

The arrows of Lórien were 40 inches long and thinner in make than the Mirkwood arrows. The arrows were dyed green and their tips were crafted into the shape of the mallorn leaves, which greatly increased the damage inflicted on a target. The Lórien quiver was crafted from wood and covered with leather and was crafted with the design of a peacock. This quiver held two dozen arrows and was belted across Legolas’ shoulders and torso ensuring that it did not move during travelling or battle.

Legolas’s white knives were kept in pearl-coloured scabbards that were attached to Legolas’ quiver when not needed. These knives were a little less than two feet in length and were both held by eight-inch long handles. They were curved in the symbolic shape of a living shoot; and their blades were made from the finest steel and engraved with a fine pattern of vines and scrollwork. They were honed on the downward side, giving Legolas an edge when fighting.

The knives were fashioned so that Legolas could use them quickly, and in slashing stroke and short stabbing motions.

Legolas would have relied on his hand and body speed in order to keep himself from getting wounded. Legolas never used a sword save for in the Battle at Helm’s Deep when he rode out with Théoden and Aragorn.

The only armour that Legolas was known to wear were leather braces, though when he was preparing for the Battle of Helm’s Deep he also wore pauldrons of boiled leather.

“The Lord of the Rings: Weapons and Warfare”