~Boromir~
" I will find no rest here. I heard her voice inside my head. She spoke of my father and the fall of Gondor."

Húrin son of Galdor was a man of the House of Hador, the Third House of the Edain. The three houses of the Edain were the three kindreds of Elf-friends who dwelt in Middle-earth during the First Age of the world. During this time many Men of these houses fought alongside the Eldar taking part in their wars with Morgoth.

During the Dagor Bragollach, Húrin and Huor the sons of Galdor of Dor-lómin were taken in by their mother’s kin, the Haladin or the Second House of the Edain, in the Forest of Brethil. There they were sheltered from the war for a time, but soon even in Brethil and Doriath the Orcs dared to come. With a host of Elves led by Beleg Strongbow, Húrin and Huor fought with their enemy until they were cut off from their company and were pursued to the Fords of Brithiach. There a mist came up about them and they fled until eagles came down and carried them to Gondolin, the city of Turgon. Turgon had received dreams and visions from Ulmo that he should harbour the sons of the House of Hador if they should come to him for from them would come help to him in his greatest need.

The brothers were sheltered in Gondolin for a year until they decided that it was time for them to return home. They returned to their people with the promise to Turgon that they would never reveal the whereabouts of his city. Some began to guess where the brothers had been and word of that reached even Morgoth, who wanted nothing more than he wanted to find the hidden cities of Nargothrond where dwelt Fingon, and Gondolin where dwelt Turgon.

During the Nirnaeth Arnoediad, Húrin was the lord of his people of Dor-lómin, and he and Huor fought as part of the host of Fingon. Upon the battlefield they met and were joined with the host of Turgon. That meeting between the sons of the House of Hador and the King of Gondolin was glad amidst the battle.

The battle turned in Morgoth’s favour and Húrin and Huor, who fought alongside Turgon, told the King of Gondolin that he must take his people and flee to his city. At first Turgon refused, but Húrin said to him “Yet if it (Gondolin) stands but a little while, then out of your house shall come the hope of Elves and Men. This I say to you, lord, with the eyes of death: though we part here for ever, and I shall not look on your white walls again, from you and from me a new star shall arise. Farewell!” Turgon heard those words and he fled while Húrin and Huor held the rearguard. It is said that “…of all the deeds of war that the fathers of Men wrought in behalf of the Eldar, the last stand of the Men of Dor-lómin is most renowned.” 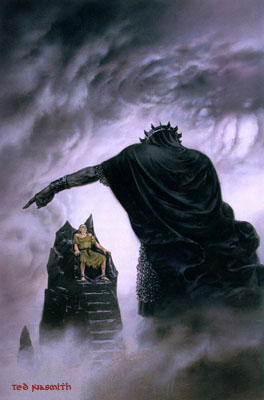 The brothers drew all of their men about them and withdrew slowly to the Fen of Serech. One by one all of their house was slain. Huor died when his eye was pierced by a poisoned arrow. Finally only Húrin stood. He drew out a great axe and he swung it with great force, killing many of his enemy. Each time he slew he cried “Aurë entuluva! Day shall come again!” After he had slain many Orcs, Húrin was captured and taken alive to Angband.

Húrin was brought before Morgoth himself and was questioned about the city of Gondolin, but Húrin would not betray Turgon. Morgoth became angry and he cursed the man and his wife Morwen, and all of their children and he laid a terrible doom upon them. Then he set Húrin in a stone chair atop Thangorodrim where he was bound by Morgoth’s power. There the Dark Lord spoke to him, “Sit now there; and look out upon the lands where evil and despair shall come upon those whom thou lovest. Thou hast dared to mock me, and to question the power of Melkor, Master of the fates of Arda. Therefore with my eyes thou shalt see, and with my ears thou shalt hear; and never shalt thou move from this place until all is fulfilled unto its bitter end.”

Húrin was held captive atop that place for 28 years and through Morgoth’s eyes he witnessed the torment of his wife and children which can be read in full in our soon-to-be completed Middle-earth article Turin Turambar.

Húrin had become grim to look upon. His beard and hair had grown long and white and he was bent. Seeing that the time was right, Morgoth finally released him and sent him on his way with a sword and a black staff. 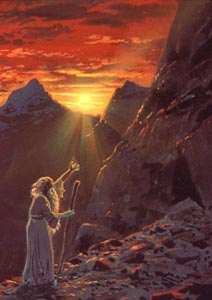 Húrin wandered long and far. At some point he looked to the mountains of Crissaegrim and he thought of the city of Gondolin and Turgon who dwelt there still. The man tried in desperation to find his way there as the spies of Morgoth watched him, though he knew it not. Húrin could not find any passage to the Hidden City so he stood before the Echoriath and he cried, “Turgon, Turgon, remember the Fen of Serech! O Turgon, will you not hear in your hidden halls?” So it was that the spies that Morgoth had sent learned where the city of Gondolin lay hidden at last.

The eagles saw Húrin as he stood there and they went to Turgon and told him the news, and the King of Gondolin believed that somehow even Húrin of the House of Hador had surrendered to Morgoth’s will. Too late he changed his mind and sent the eagles to retrieve him, but Húrin had gone and was never seen again.

Húrin had slept and in his dreams he heard Morwen, his wife, calling to him form the Forest of Brethil. He awoke and went there and came at long last to the place where his son, Túrin Turambar, has slain Glaurung the dragon and then himself. He saw there a woman lying against Túrin’s grave. She was old and bent and tired but when he looked into her eyes he knew that it was Morwen. They spoke briefly, but now that she had seen her husband again, she relinquished her life and by morning she had died. Húrin buried her there next to the grave of their son.

A rage grew inside of Húrin and he sought for revenge against any who had dealings with his family during his captivity, for he had seen all things, and he knew of all of their deeds. Therefore he went first to Nargothrond, and coming to the doors he found Mîm the dwarf, who had betrayed Túrin, and he killed him. He went then into the abandoned city and stayed there a while. When he finally emerged, of all the treasures therein, he took only one thing, the Nauglamir in which was nestled a Silmaril.

Húrin went then to Doriath and was brought before King Thingol. There he showed to the king the Nauglamir and cast it at his feet and said, “Receive thou thy fee! For this is the Nauglamír, whose name is known to many among Elves and Men; and I bring it to thee out of the darkness of Nargothrond, where Finrod thy kinsman left it behind him when he set forth with Beren son of Barahir to fulfil the errand of Thingol of Doriath!” 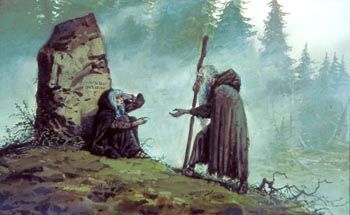 To those words Thingol did not reply for he was suddenly filled with pity. But, Melian, his wife said to Húrin, “Húrin Thalion, Morgoth hath bewitched thee; for he that seeth through Morgoth’s eyes, willing or unwilling, seeth all things crooked. Long was Túrin thy son fostered in the halls of Menegroth, and shown love and honour as the son of the King; and it was not by the King’s will nor by mine that he came never back to Doriath. And afterwards thy wife and thy daughter were harboured here with honour and goodwill; and we sought by all means that we might dissuade Morwen from the road to Nargothrond. With the voice of Morgoth thou dost now upbraid thy friends.”

As Húrin heard Melian’s words and looked into her eyes, he saw at last the truth and he left Menegroth. From there he left the land of Doriath and wandered until he finally cast himself into the western sea and so passed the mightiest of the warriors of mortal Men.

Line of Descent of Húrin Thalion ‘the Strong’

1st son: Galdor – wed Hareth of the Haladin. Killed during the siege of Eithel Sirion fighting on behalf of Fingon.

Húrin Thalion – wed Morwen of the House of Bëor