For a chance to win a copy of Peter Jackson’s biography and a Lord of the Rings box book set enter the competition at Total Film.

The competition is open to UK residents aged 18 years and over. The closing date is 2nd January.

Some more dates for performances of Howard Shore’s Lord of the Rings Symphony;

4th-6th May – in Lucerne, Switzerland.

Today, December 17th is Bernard Hill’s birthday. Bernard was born in 1944 in Manchester, England and today he will celebrate his 62nd birthday. You can read his cast bio here. In the CoE gallery there are pictures of Bernard here and of Bernard in the role of Théoden here.

We need you to vote for our new Realm Sceptre image! Please stop by here and check them out, then vote for the one you like best!

Today, December 16th is Miranda Otto’s birthday. She was born in Brisbane, Australia in 1967, and is 39 today. You can read her cast bio here. In the CoE gallery there are pictures of Miranda here and of Miranda in the role of Eowyn here.

The December Newsletter by the realm of Vaire is now up in the realms forum. The weavers have been weaving many articles, pictures and poetry…even a history quiz. We hope you enjoy the newsletter which you can view here.

The sky was clear — remarkably clear — and the twinkling of all the stars seemed to be but throbs of one body, timed by a common pulse. The North Star was directly in the wind’s eye, and since evening the Bear had swung round it outwardly to the east, till he was now at a right angle with the meridian. A difference of colour in the stars — oftener read of than seen in England — was really perceptible here. The sovereign brilliancy of Sirius pierced the eye with a steely glitter, the star called Capella was yellow, Aldebaran and Betelgueux shone with a fiery red.

To persons standing alone on a hill during a clear midnight such as this, the roll of the world eastward is almost a palpable movement. The sensation may be caused by the panoramic glide of the stars past earthly objects, which is perceptible in a few minutes of stillness, or by the better outlook upon space that a hill affords, or by the wind, or by the solitude; but whatever be its origin, the impression of riding along is vivid and abiding. The poetry of motion is a phrase much in use, and to enjoy the epic form of that gratification it is necessary to stand on a hill at a small hour of the night, and, having first expanded with a sense of difference from the mass of civilised mankind, who are dreamwrapt and disregardful of all such proceedings at this time, long and quietly watch your stately progress through the stars. After such a nocturnal reconnoitre it is hard to get back to earth, and to believe that the consciousness of such majestic speeding is derived from a tiny human frame.

from Far from the Madding Crowd by Thomas Hardy

There is sweet music here that softer falls
Than petals from blown roses on the grass,
Or night-dews on still waters between walls
Of shadowy granite, in a gleaming pass;
Music that gentlier on the spirit lies,
Than tir’d eyelids upon tir’d eyes;
Music that brings sweet sleep down from the blissful skies.
Here are cool mosses deep,
And thro’ the moss the ivies creep,
And in the stream the long-leaved flowers weep,
And from the craggy ledge the poppy hangs in sleep.

from The Lotos-Eaters by Alfred, Lord Tennyson 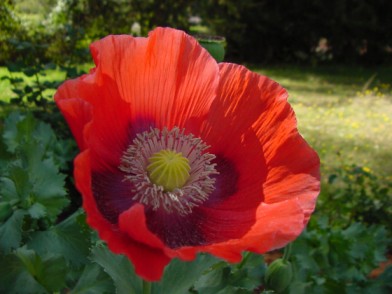 The Anemone Song
translation by Eressëa

The day is so full of anemones
Birds’ twittering, play of colours in light crowns
The night full of dangerous demons
Wags, wizards and old witches

Anemones, delicate and easily wind-bruised, lifted ivory flowers, the petals of which seemed to have been dipped in wine.

from My Family and Other Animals by Gerald Durrell

We returned through the sun-striped olive groves where the chaffinches were pinking like a hundred tiny coins among the leaves. Yani, the shepherd, was driving his herd of goats out to graze. His brown face, with its great sweep of nicotine-stained moustache, wrinkled into a smile: a gnarled hand appeared from the heavy folds of his sheepskin cloak and was raised in salute.

“Chairete,” he called in his deep voice, the beautiful Greek greeting, “chairete, kyrioi… be happy.”

The goats poured among the olives, uttering stammering cries to each other, the leader’s bell clonking rhythmically. The chaffinches tinkled excitedly. A robin puffed out his chest like a tangerine among the myrtles and gave a trickle of song. The island was drenched with dew, radiant with early morning sun, full of stirring life. Be happy. How could anyone be anything else in such a season?

from My Family and Other Animals by Gerald Durrell

I wander’d lonely as a cloud
That floats on high o’er vales and hills,
When all at once I saw a crowd,
A host of golden daffodils;
Beside the lake, beneath the trees,
Fluttering and dancing in the breeze.

Continuous as the stars that shine
And twinkle on the Milky Way,
They stretch’d in never-ending line
Along the margin of a bay:
Ten thousand saw I at a glance,
Tossing their heads in sprightly dance.

The waves beside them danced; but they
Outdid the sparkling waves in glee:
A poet could not but be gay,
In such a jocund company:
I gazed — and gazed — but little thought
What wealth the show to me had brought:

For oft, when on my couch I lie
In vacant or in pensive mood,
They flash upon that inward eye
Which is the bliss of solitude;
And then my heart with pleasure fills,
And dances with the daffodils.

Author of the Month

In an alternate 19th century England, magic has disappeared from the land, and magicians have passed into legend. Magic has become the stuff of dusty tomes and speculative delights, yet Messrs. Strange and Norrell are the two magicians who have brought magic back to England, only to have reawakened forces which have slumbered for hundreds of years.

Q1 – The dwarf cities in the Blue Mountains were called Belegost and Nogrod by the elves. What were the dwarvish names?
Difficulty Level – Difficult

Q2 – The Nauglamír was made by the dwarves of the Blue Mountains. For which Noldor lord was it made?
Difficulty Level – Average

Q3 – In the days of the Long Peace, men started to come into the West. Which house of men were the first to come?
Difficult Level – Difficult

Q4 – The Valar summoned the elves to Valinor in an effort to protect them from Melkor. What were the names of the three hosts that were willing to take the road?
Difficult Level – Easy

Q5 – Eärendil was set to sail the skies in his ship Vingilot. What jewel was bound on his brow?
Difficult Level – Easy

Q1 – In which year was Rivendell founded?
Difficulty Level – Difficult

Q3 – What realms were established in Middle-earth by the Faithful after the fall of Númenor?
Difficulty Level – Easy

Q4 – In around which year were the Three Rings forged?
Difficulty Level – Difficult

Q5 – The defeat of which individual was one of the final events of the Second Age?
Difficulty Level – Easy

Q1 – In this year a major Gondorian city once known as the Tower of the Moon fell to the forces of Mordor.
Difficulty Level – Difficult

Q2 – This dwarf was too keen to sleep after falling in a river; his friends had trouble carrying him.
Difficulty Level – Easy

Q3 – These three held the Elven rings first; who are they and which ring did each have?
Difficulty Level – Average

Q4 – What caused the death of the White Tree in 1636 of the Third Age?
Difficulty Level – Difficult

Q5 – Which is older – Bilbo or Theoden?
Difficulty Level – Easy

Q1 – Who was the only dwarf said to have travelled to the Blessed Realm in the West?
Difficulty Level – Easy

Q2 – How many times was Sam elected mayor of the Shire?
Difficulty Level – Moderatly easy

Q3 – In this year came the passing of King Elessar.
Difficulty Level – Difficult

Q4 – Who died upon Cerin Amroth, in Lorien, when “the mallorn-leaves were falling, but spring had not yet come?”
Difficulty Level – Easy

Q5 – What race was banned from entering the Shire by King Aragorn?
Difficulty Level – Easy