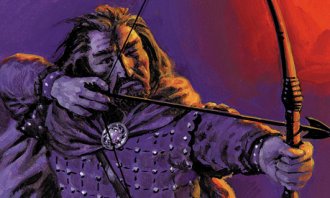 Related Terms: Lake Town, Smaug, Dale
A bowman of the Lake Town of Esgaroth. Descendant of Girion, King of Dale, and bearer of the Black Arrow. Slayer of the dragon Smaug.

Bard had long black hair and a grim, even fierce countenance, but had leadership qualities that commanded respect. From his ancestors, the Men of Dale, Bard inherited the gift of prophecy, and could understand the speech of birds. Also, being the eldest of his line he carried the Black Arrow

In TA 2941, it was Bard who identified the approach of Smaug, alerted the Master of Lake Town, and issued the call to arms. Thus the people were somewhat prepared and Bard urged on the archers as the dragon flew low over the town setting it aflame. Eventually, as the last man standing, and with only the Black Arrow in his quiver, Bard heard the voice of a thrush, telling him of a weak spot in Smaug’s bejewelled hide. Firing the Black Arrow into the dragon’s breast, Bard flung himself into the water as the dying Smaug plummeted onto the blazing town.

A quarter of the population had perished, and with the Master of Lake Town, a weak and self-serving man, too traumatised to function, Bard set about organising emergency services for the survivors. Nevertheless, he knew they had not the resources to secure shelter and food before winter came. Bard petitioned the Elvenking for aid, and he, already marching toward the Lonely Mountain in hopes of treasure, turned aside on a mission of mercy to the people of Esgaroth, bringing them supplies, labour and materials.

The people wanted Bard to be King but he refused. His priorities were to feed and house the people and then restore Dale, the long-ruined town of his ancestors. Once emergency measures were in place, Bard and those men who were able, marched north with the Elvenking, to claim a share of the hoard, some of which Smaug had looted from Dale.

Surprised to find that Thorin and Company had survived, and blaming them for stirring up the dragon, Bard demanded payment for the damage Smaug had wrought, but Thorin was intransigent, saying that the Lake-men had no right to a share.

Bard asked Thorin for “pity beyond right” and a 12th of the treasure to aid Esgaroth but Thorin shot at Bard’s messenger who declared the mountain besieged, and Bard and the Elvenking prepared to take part of the hoard by force.

With an army of dwarves already marching to Thorin’s aid Bard was eager to attack, but Gandalf intervened, warning of an approaching force of Goblins (orcs) also intent on the treasure. Thus the dwarves, elves and men became allies and fought the Battle of Five Armies.

After the defeat of the Goblins Bard received a 14th share of the treasure. He gifted the Emeralds of Girion to the Elvenking in thanks for his aid, and sent gold for the relief of Esgaroth. With the rest he restored the town of Dale and became King there, joined by folk from the Long Lake and other places.

Bard had a son Bain who ruled after him.
Encyclopedia entry originally written by Tindu