~Arwen~
"The light of the Evenstar does not wax and wane. It is mine to give to whom I will. Like my heart." 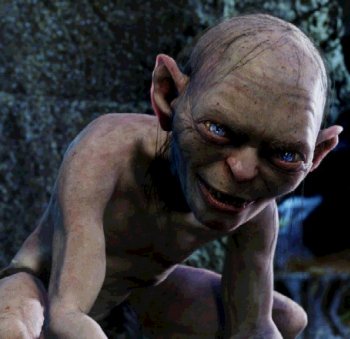 Related Terms: Stoors, DÃ©agol, One Ring
A hobbit of the Stoor tribe, born near the River Gladden in the 25th century of the Third Age. His parentage is not stated. Originally called Sméagol, he perished in the fires of Orodruin in TA 3019.

Gollum’s early history, found under Sméagol, tells how in about TA 2463, he murdered his friend Déagol for possession of a golden ring of evil power and how it corrupted his already faulty character until he lost all his friends and was driven away alone. He was nicknamed Gollum from his habit of making choking glottal noises in his throat and was known by that name ever after.

The ring that Gollum stole was in fact the ruling One Ring lost by the Dark Lord Sauron long before. It prolonged his life for hundreds of years but drove him, in TA 2470, to enter the tunnels of the Misty Mountains, hiding from light until he became a skinny, crawling creature, bearing little resemblance to a hobbit. It was there that Bilbo Baggins met him in TA 2941, as told in The Hobbit.

Deep underground Gollum lived on a slimy island in a dark lake, paddling a small boat with his feet, and surviving on fish and stray goblins both of which he ate raw! His eyes had grown huge and pale in the darkness. He kept his pockets full of bones and teeth, but the ring he kept in a hole on his island, hiding it yet loth to be parted from it, and using it only when he needed invisibility. It was on one such occasion that Gollum lost the ring and Bilbo found it.

Gollum talked to the ring, and himself, addressing both as “Precious”, his personality having split between his addiction to the ring and his longing to be free it. His memories of simple childhood things led him to challenge Bilbo to a game of riddles which Bilbo won by asking a question to which only he knew the answer “What have I got in my pocket?”.

Gollum had promised to guide Bilbo out of the tunnels but meant, with the aid of the ring, to kill and eat him. Realising the ring was lost, Gollum set off to find it, talking to himself, and Bilbo, following him, learned of its powers. Bilbo thought to kill Gollum, as he sat despondent, blocking his path, but Gollum’s wretchedness reached out to him and in pity he spared him. Instead, invisible, he leapt over him and escaped. That act of mercy had far-reaching effects that neither of them could have imagined.

The true nature of the ring and its eventual fate are told in The Lord of the Rings where Gollum’s story also continues. Guessing that Bilbo had the ring, Gollum left the Misty Mountains in search of him but was caught and tortured in Mordor by servants of the Dark Lord. They got from him the words “Baggins” and “Shire” and set him loose to continue his search. He was soon captured again, this time by Strider (Aragorn) who delivered him for safekeeping to the Elves of Mirkwood.

Gollum escaped again, with outside help, and took refuge in Moria from whence he trailed the Fellowship to Lothlorien and on down the River Anduin until they parted at Amon Hen. From there he followed Sam and Frodo into the Emyn Muil where they captured him and took him for their guide after he swore loyalty by (but not on) the Precious. Frodo could have killed Gollum, but like Bilbo before him, he perceived Gollum’s wretchedness and in pity stayed his hand. Sam on the other hand, had no sympathy for him at all, calling the two sides of him Slinker and Stinker.

Gollum guided Sam and Frodo first to the Black Gate and then south through Ithilien where they were captured by Faramir of Gondor, but spared to continue their journey. Turning east at the crossroads, Gollum led the hobbits up the Morgul Vale and the Stairs of Cirith Ungol to Shelob’s Lair intending that they should be killed by her, and the ring left among their bones. Frodo was indeed stung by Shelob. He was not killed, however, but taken captive by Orcs, though Sam soon released him.

Gollum trailed Frodo and Sam across Mordor, attacking them on the slopes of Orodruin, unsuccessfully, for he was daunted by the revealed power of the ring as it neared the Cracks of Doom. Nevertheless he caught up with the hobbits in the Sammath Naur where he bit off Frodo’s finger but staggered and fell into the molten heart of the mountain.