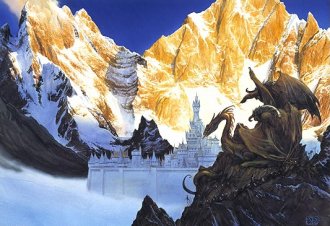 Related Terms: Fall of Gondolin, Gates of Gondolin, Turgon
“Hidden Rock”. Gondolin was the most beautiful, most renowned and longest to endure of all the Noldorin city-kingdoms founded in Middle-earth during the First Age. It was completed in the second century of the exile of the Noldor by Turgon, son of Fingolfin.

Turgon was aiming to prepare a last refuge against foretold disaster, but yet he also wanted to dwell in a fair place, as much like Tirion as possible. He found the location for Gondolin after being told by Ulmo to go searching for a hidden pass. The power of Ulmo in the Vale of Sirion also helped keep it secret. A law was set down that any stranger who might find their way to the city was not to leave, and no one but the people living there were to know its whereabouts. Within the mountain perimeter, all that was fair in elven culture was preserved, with reverence. Gondolin was built in 52 years starting around 64 of the First Age, with a constant guard up so no one could discover its location.

It was a white city, with high white walls and a tall tower for the King. Turgon never ceased to add to the city’s strength and beauty. High towers were built, and mighty walls, yet the towers were slender pinnacles of grace and proportion, and the walls shone in the sunlight. In Turgon’s Halls were images of the Two Trees of Valinor, so real that they seemed to stand in the Halls.

The first being to come secretly to Gondolin was Eöl, the Dark Elf. He followed Aredhel to the city, and was taken in by the guard. The first men to see the city were Húrin and Huor, brought there by the Eagles.

Gondolin was situated on the sides and summit of Amon Gwareth - a steep and precipitous hill which originally rose up from the exact centre of a circular lake, Tumladen, in the Encircling Mountains in the north of Beleriand. However, over the ages, the lake dried up, drained through long-vanished channels, and all that remained was the vale and Amon Gwareth.

Fifty years after the first stone had been laid for Gondolin, Turgon and his people vanished into the mountains from Nevrast. From that day forth, few elves ever passed the outer doors until the Nirnaeth Arnoediad. Gondolin became the “Hidden City”, its whereabouts not even known by its allies.

The road leading to the Gate of Gondolin was disguised as the Dry River, a rough way with stones littering the floor. Nearer the Gate, the hills towered up like sheer walls. At the walls of the mountains, there was a great precipice, rising sheer and sudden from a steep slope upon which grew a tangled thicket of thorn-trees. The stony channel entered the thicket, and the branches formed a roof. At the foot of the cliffs there was an opening leading to a low tunnel. There lay the first Gate – the Gate of Wood. This was a wide arch with tall pillars on either side, hewn from the rock. Between them hung a portcullis of crossed wooden bars, carved and studded with iron nails. It rose silently with a single touch. After the Gate was a great ravine, carved when the Valar went to war. Between the walls was a ribbon of sky, where the stars could be seen even in the daytime. The path was lit with lamps giving off pale light and climbed steeply, sometimes using stairs, sometimes winding slopes.

The second Gate was the Gate of Stone, approximately half a league from the first gate. It was placed in a great wall built across the ravine from side to side, with stout towers of stone at either side. Above the road was a great archway containing a single huge block of dark and polished stone. A white lamp hung in the midst of the arch. The stone turned on an invisible pivot. After the gate was a courtyard containing many armed guards, and in the northern tower was a chamber.

The third Gate, set in an even higher and stronger wall, was the Gate of Bronze. This was a great twofold door hung with shields and plates of bronze, on which were wrought many figures and strange signs. Above the lintel were three square towers, roofed and clad with copper that was ever bright, and which gleamed in the light of the red lamps ranged along the wall. After the gate was the worst part of the road, as the slope was at its steepest.

Looming over the road was the Fourth Gate – the Gate of Writhen Iron. Its wall was high and black, and unlit. Four towers of iron stood upon it, and between the two inner towers was set an image of a great eagle wrought in iron. A light came through the traceries of the gate, which were wrought and hammered into the shapes of trees with writhing roots and woven branches laden with leaves and flowers. However, the wall was of great thickness, and there were three grilles in line. Behind the Gate stood lines of Iron Guards, with black mantles, mail and long shields. Their faces were masked with visors bearing an eagle’s beak. Beyond this gate, the road ran almost level, having passed the crown of the Echoriath. The mountain towers then fell swiftly down towards the inner hills, and the ravine became less sheer. Beside the road was a sward of grass, with white flowers.

The Fifth Gate was the Gate of Silver. Its wall was white marble, and was low and broad. Its parapet was a trellis of silver between five great globes of marble, and on it stood many archers robed in white. The gate was shaped as three parts of a circle, and wrought of silver and pearl in likenesses of the Moon. Above the Gate, on the midmost globe, stood an image of Telperion, wrought of silver and malachite, with flowers made of the great pearls of Balar. Beyond the Gate was a wide court paved with green and white marble, and there stood more archers clad in silver mail and white-crested helms. A long white road ran to the Sixth Gate, and along this road the grass sward widened, and the white flowers had opened, showing centres of gold.

The Sixth Gate was the Golden Gate, the last of the ancient gates of Turgon that were wrought before the Nirnaeth Arnoediad. It was like the Gate of Silver, but the wall was built of yellow marble, and the globes and parapet were of red gold. There were six globes, and in the midst there was a golden pyramid upon which was set an image of Laurelin. Her flowers were wrought of topaz in long clusters upon chains of gold. The Gate itself was adorned with many-rayed discs of gold set amid devices of garnet and topaz and yellow diamonds. In the court beyond the Gate were 300 archers with long bows. Their mail was gilded and tall golden plumes rose from their helmets. Their round shields were as red as flame.

The Seventh Gate, named the Great, was the Gate of Steel that Maeglin had wrought after the return from the Nirnaeth. It lay across the wide entrance to the Orfalch Echor. There was no wall, but on either side were two high, round towers, many-windowed, and tapering in seven storeys to a turret of bright steel. Between the towers stood a mighty fence of steel that could not rust, ending in a bitter spike, and between the pillars were seven cross-bars of steel. In each space were seven times seven rods of upright steel, with heads like the blades of spears. Above the midmost pillar was raised a mighty image of the king-helm of Turgon, set with diamonds. The Gate was opened by striking on a bar, which made the fence ring like a harp, giving forth clear notes that ran from tower to tower. Then riders would issue from the towers, and from the north tower one rider came forth on a white horse – the Warden of the Great Gate.

Beyond the Gates was a meadow looking out over the valley below, with Gondolin amidst the snow.

The first time Turgon opened the Gates was during the Niraneth Arnoediad (The Battle of Unnumbered Tears). He marched unbidden and unexpected to the aid of his kin. He also managed to retreat secretly, with the aid of