~Morgoth~
"Then Morgoth hurled aloft Grond, the Hammer of the Underworld, and swung it like a bolt of thunder." 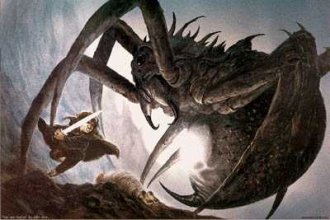 Pronunciation: Shee lob
Related Terms: Ungoliant, Giant Spiders
Shelob was presumed to be the last offspring of Ungoliant, the Giant Spider who killed the Two Trees of Valinor.

She belonged to, and served, no one, not even Sauron and she was in the land of Mordor before he ever arrived. The place she made her home was called Cirith Ungol. Her body was a bloated bag, black except for her pale, stinking underside.

Shelob's venom did not kill, it merely made her victims fall asleep so while they were sleeping she could dine peacefully on her prey. She would not eat dead meat.

On January 12th, TA 3019, Gollum lead Sam and Frodo to the lair of Shelob were she attacked them numerous times until finally when Sam was distracted by Gollum, Shelob attacked the weary and burdened Frodo. Sam then came to Frodo's rescue and defeated Shelob with Sting.
Encyclopedia entry originally written by Firniswin