~Gollum~
"Master betrayed us. Wicked, tricksey, false. We ought to wring his filthy little neck. Kill him. Kill him. Kill them both, and then we take the Precious and we be the master." 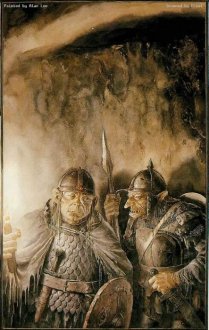 Related Terms: Morgoth, Sauron, Uruk-hai
Orcs were first bred by Melkor in the Elder Days.They appeared in Middle Earth sometime after the birth of the Elves, and were afterwards believed to have originated from corrupted versions of those Elves.

They hated the light of the Sun, emerging from their lairs only at nightfall to do battle for their Master (Morgoth and later Sauron). Although they were cowardly and unreliable, they were formidable opponents as long as the will of Morgoth or Sauron animated them. Emnity between the Orcs and the Elves was bitter.

But to Morgoth, Orcs were simply "cannon fodder" - his most expendable commodity in battles. They were easy to breed and easy to lead, and only in great numbers (or when accompanied by a balrog or dragon) were they able to withstand their enemies and attack successfully. However, they were filled with demonic energy, had formidable strength, and hated Elves and Men with an abiding hatred.

During the Second Age, the Orcs spread out from Angband into the Misty Mountains, the Ered Mithrin and other mountain ranges and passes. The Orcs also diversified into different breeds, varying to some extent in size and colouring. They were still all possessed of the same barbarian nature, and they were all hideous to look at. They wielded spears and scimitars, and wore shields of hide. Their weapons were often poisoned.

In the first part of the Third Age, most of the Orcs who had survived the Last Alliance dwelled in their old lairs in the Misty Mountains. Their chief stronghold was Gundabad. However, they soon spread out, occupying Moria and most of their haunts from the Second Age.

In TA 2510, Celebrían was captured by a band of Orcs in the Misty Mountains, and from then onwards, routes across the Mountains from Eriador to Wilderland became increasingly dangerous to travellers.

Very few Orcs have been mentioned by name. Azog was the name of the Orc who killed King Thrór of the Dwarves, while Azog's son Bolg led the Orcs to the Battle of Five Armies. Golfimbul led an invasion ofThe Shire in 2747 and was killed by Bandobras Took. During the War of the Ring, a chieftain of the Goblins was called Grishnákh.
Encyclopedia entry originally written by hungry123hobbit